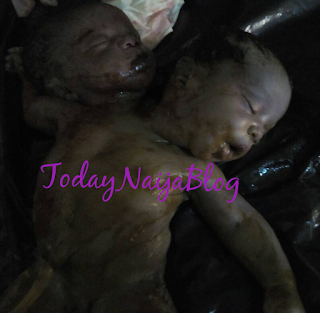 Two heads are better than one, so goes the popular saying.
But there are times when two heads are a big problem, such as with a new born baby delivered on Wednesday at a general hospital in ILLELA, LGA of Sokoto State.


It has two heads with oxygen tube strapped on each, a neck, chest, two legs and two hands.
In medical parlance, the condition is known as Parapagus. It is a rare form of partial twinning where there are two heads and two necks side by side on one torso.
Such cases are rampant in India and doctors say they cannot be separated since they have only one pair of arms and one pair of legs and one heart. This disorder is different from conjoined twins as the baby has only one set of internal organs. The extremely rare case is thought to be brought on during the early stages of pregnancy as a result of genetic mutation.
By Maryam Wokili