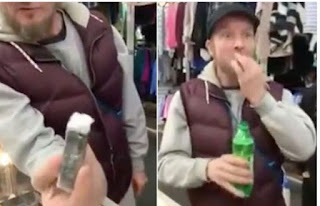 To prove how easy it is to smuggle a mobile phone into jail, a man decided to swallow a phone by wrapping it in a condom and taking it whole. The miniature HMP mobile used by the man fr the experiment is a “mini phone perfect for criminals” because they evade all body scanners.

A video footage posted online shows a man inside a shop, talking eagerly to his friend behind the camera. He starts swaddling a mobile phone in cling film, before holding it up to the lens. The man unwraps a condom and slides it over the phone, pinching the bottom to tie it up tightly.

The man swallows the phone , with a feeling of “satisfaction”.

The man later takes a swing from a bottle of Seven-up and even offers to swallow another one.
By Maryam Wokili