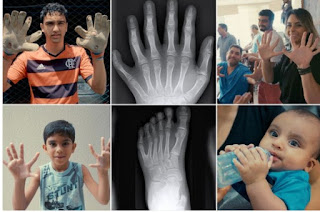 A family of 14 who were all born with six fingers and six toes have welcomed another member to their clan, a baby boy with same genetic abnormality. The extraordinary De Silva family, from Brasília, Brazil, have used the extra digit to their advantage and say the abnormality makes them “stand out from the crowd”.

And new dad Alessandro is delighted his new son has inherited the family mark.
He said: “This is a mark that no other family has.”
Alessandro has six fingers, whilst his wife Katia, only has five – meaning there was a 50 per cent chance of their baby boy Vinicius inheriting the six-finger gene.
With their first son Guilherme proudly owning six fingers, they were hoping their newborn would follow suit.
Katia said: “We found out that Vinicius was a boy in the thirteenth week of pregnancy and from that moment on we were hoping that he would have six fingers.”
Her husband added: “Since Vinicius was born we noticed that his fingers are perfectly functional. He is already trying to grab things, so all his fingers work normally.”

The genetic syndrome that causes people to be born with extra fingers and toes is called Polydactyly. Surprisingly, it occurs in one in 1,000 births.
Seven-year-old Guilherme said: “The coolest thing about having six fingers being able to hold a lot of things at once.”
His cousin Maria added: “The best thing about having six fingers is I can play more keys [on the piano].

And goalkeeper Joao Assis said: “I’m able to reach some balls when people can’t. For me it’s easier to hold the ball, I have more grip and my hands covers more, so it’s difficult for the ball to escape.”
Alessandro’s grandfather Assis is responsible for turning the family’s deficiency into something to be proud of.
By Maryam Wokili