Sad! Young Soldier Dies In Enugu State After His Passing Out Parade In Kaduna (Photos) 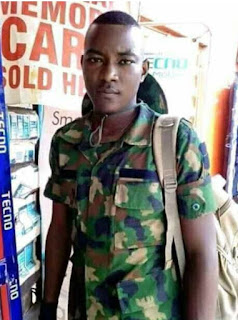 A young soldier identified as Baffa Magaji from Bauchi state – has left his family in sorrow following his untimely demise in Enugu state. According to reports, the soldier passed away due to a sickness after his passing out parade POP at the Nigerian Defence Academy NDA in Kaduna state.

The gallant soldier died just 34 days after meeting with his family members. May his soul rest in peace.

Email ThisBlogThis!Share to TwitterShare to FacebookShare to Pinterest
Category: News.