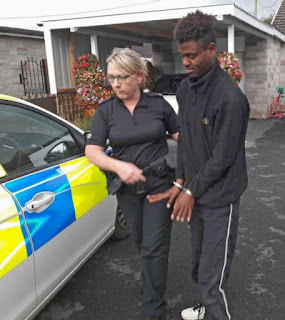 According to The Sun UK, Paul was unpacking when he saw the man’s trainers poking out from among his bags.
Paul said:
“He asked if he was in England. I said ‘Yes — well Wales, actually.’ He made a prayer gesture and smiled.” The man, who crept into the van at Calais, was arrested in Caersws, Wales.
Paul and wife Janet stopped in the French port for a toilet break before taking the Eurotunnel shuttle back to Britain. But as Paul unpacked their Nissan Navara at home following a 4½ hour drive from Folkestone he spotted a strange pair of trainers.
When the Ethiopian found out he was in Wales he made a prayer gesture and smiled. Then he saw the legs of the 22-year-old migrant, who had trekked 4,500 miles to reach Paul’s home in Caersws, Wales.

Businessman Paul said: “When I saw a face I asked ‘Where do you come from, Calais?’
“He didn’t speak English but was able to ask if he was in England. I said ‘Yes — well Wales actually’ and he made a prayer sign and smiled. “I asked him again where he was from and he said ‘Africa’. “He had a phone and was trying to contact someone here.
“I’ve never seen my wife’s mouth open so wide as when she saw him step out of the boot.”
Paul called the police and gave the stowaway some water and chocolate while they waited for them. The man was arrested and handed to immigration officials.
Paul, Janet and two friends had been on a four-day trip and stopped at Calais for an hour before boarding the shuttle.

He said: “The three others went for a coffee while I had a nap in the vehicle. He could have jumped in while I was asleep.”
During the drive from Folkestone Paul stopped twice, to get petrol and for a toilet break.
The Home Office said the man will be dealt according to immigration rules. Lorry drivers face fines if stowaway migrants are found but holidaymakers do not.
By Maryam Wokili