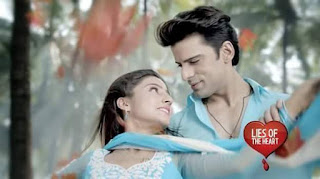 Engagement ceremony or Urmi and Samrat. Ishan welcomes everyone to be sitted and begins the sangeet function. All Urmi’s brother bhabhi, sister and friends dance and give their performance for the ceremony on various dance numbers.
Ishan does the anchoring giving life to the performances. Urmi enjoys all happy moments and performances sitting besides Samrat.Urmi’s Aunt also gives dance performance on mere photo ko….. Urmi’s father and mother also give their performance. Samrat thinks about Tashi challenge and thinks she will again try her best to break his marriage with urmi.Anu asks ishaan to dance along now. Ishaan agrees while anu is also teased by him. he enthusiastically breaks into his dance number. Urmi is happy being in samrat’s company, while trisha is tensed. Ishaan again goes onto provide in his fillers within items. He introduces samrat’s sister in laws for the next item. trisha is disinterested while urmi insists her to daance on the stage. all ask her to go on for dancing. trisha is grumpy but gets up nerevtheless, while samrat sits indifferent.

Samrat fixates his gaze on trisha, while urmi oblivious to all this, is enjoying the item of her sisters. Samrat goes on stage, while trish gets tensed to see him. he throws money over Trisha, surprising everyone while she gives her performance for the function. She is highly insulted by this, as samrat smiles evilly. she abruptly leaves the stage, while all are visibly tensed. she gets down and comes back in the sitting area, and walks out, shocking everyone. urmi is tensed.Samrat is engared. Trisha’s mother makes up for it, by making an excuyse that she wasnt feeling very well. all are boggled. samrat asks her to let be, as she wasnt feeling very well. Her mother too reassures this. samrat asks to finish off the functionn now, as there has been enough dance and songs, and that they should finish the function. Ishaan says that they cant finish the function, without the bride and the groom’s performance.

All gear up for it, while samrat stands defiant and urmi is hy and nervous. urmi hesitatingly get up, while her in laws’ ask her to get up on the stage, and make this function memorable. trisha’s mother leaves to check on her. urmi gets up on the stage after everyone cheers up for her. As urmi starts dancing, samrat too begins tapping his feet along with her. samrat and urmi dance together, with much romance and intimacy.

Rashmi’s mother asks samrat’s mother to come along outsaide, as everyone is waiting. But samrat’s mother is very angry at trisha’s behaviour. Samrat’s mother is angry that she had to apologise when samrat asked him to, in front of urmi’s mother, and now their daughter, trisha is insulting samrat, like this in frotn of everyone and that they wont take it lying down. Rashmi comes in saying that they did scold her badly, as she was feeling very sick. samrat’s mother says that she should have stayed at home, if she wasnt feeling well.

Rashmi says that it was their insistence that she came and danced too, after much pressure. samrat’s mother is still in a rage and fuming at all this. rashmi and her mother convince her that urmi is their bahu and she is a gem of a person, and they dont have to be related to trisha. Her husband too comes in and asks samrat’s mother to get up, and go outside to receive the guests. he asks shashi to get over minor differences, compose herself and come out. He asks rashmi to come out.Trisha too is reprimanded by everyone, as to why did she run away, as if she was feeling nauseous, then she should have stayed there only. They are all angry that due to her, the sangeet functionwas ruined, and that today’s behaviour was untolerable. Saroj asks her to calm down. Granny too thinks that its good that rashmi is there to calm things down.

Urmi’s mother and father go on to explain it to her, how this kind of behaviour can lead to urmi listening lifelong to a series of taunts. They ask for the matter to be over, so that everything can normalise again. all leave, except for trish and her mother. Her mother still goes onto reprimand trisha, that despite telling her, she’s behaving like this.Trisha’s mother ass trisha why doesnt she like him, as he even got his own mother to apologise, and that nowhere they would find a man, who can do this much for the in laws’. she tells trisha that everyone likes samrat, and her opinion doesnt matter. She asks how much pressure they are in right now, due to trisha’s rash behaviour. The screen freezes on samrat’s mother’s fuming face.
By Maryam Wokili