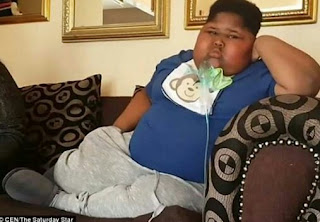 A 10-year-old boy who is constantly hungry due to a rare condition eats rolls of toilet paper if he is unable to get any other food. Caden Benjamin, from Standerton in South Africa, weighs 14 stone 2lbs (90 kilogrammes) because of his constant overeating.  He has been diagnosed with a genetic disorder called Prader-Willi syndrome, which is characterised by an obsessive compulsion to eat. 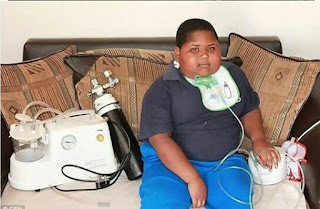 His mother Zola Benjamin says it means Caden will eat anything he can get his hands on. ‘At one point, Caden was eating toilet paper. He’d eat rolls of it,’ she said. ‘Actually, he’d eat any paper he would find in the house. If there’s nothing for him to eat, he’ll scrape together the dirt he finds on the floor and eat that.’ Prader-Willi syndrome is a rare, incurable disorder that affects thousands of people worldwide, resulting in physical, mental and behavioural problems.
Ms Benjamin has had to lock all her kitchen cabinets and her fridge and hide all food items in the house.Caden struggles to move around and even breathe because he is so overweight.He also suffers bouts of depression because he is unable to live like a normal child.
By Maryam Wokili