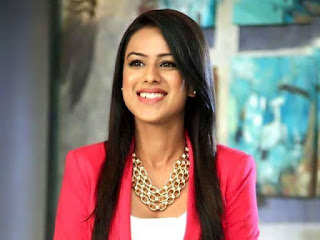 Doctor checks Anya. Anya says she is better. Doctor asks Anya to avoid stress as it is harmful for the baby. Anya says we have to travel in 3 days. Doctor says I can’t permit you to travel in the first trimester. Sid says the same, but Doctor refuses and prescribes the medicine. Anya turns, smirks and signs at the doctor (new vamp). Doctor also signs her happily (as they have trapped Sid).

Anya apologizes to Sid. Sid says it is not your mistake, we will think something. Sid tells Anya that it is raining outside and storming night. He says you shall get admitted in the hospital for tonight and I will be with you.
Sid calls at landline phone. Mitul hears Neil talking to Roshni and saying he will come. Mitul gets an idea and takes Sid’s message. She then asks Ranjeet to give asthma pump to Naina, who went to office.

Ranjeet says he will not go as it is raining. Sid hears this, tells Anya that he will get her admitted in hospital and buy pump and give to Naina in office. Roshni is alone in office after everyone leaves from the office. She calls security as the light is off. She sees someone coming and asks hugs him, says you came…light went off and I was scared. She sees Sid and is shocked.

Roshni hugs Sid thinking him to be Neil while electricity is not there and raining. Sid asks where is Naina? Roshni says she is not here. Sid says Mitul told him and says may be there is some misunderstanding. He tells Roshni that he has admitted Anya in the hospital and asks her to come with him after informing Neil. Roshni calls Neil, but his call couldn’t be reached. Sid and Roshni come out and sees it is raining heavily. Sid says we shall stay back in the office till rain stops. They come inside the office.

Sid asks Roshni to change her dress as it is drenched fully in rain, and asks her to wear the model’s outfit. Roshni says okay and says I will make coffee for us. Sid also changes his clothes. Mitul calls Neil and informs her that Anya is admitted in the hospital. Neil says okay, I will pick Ragini from office and go to hospital. Mitul thinks it will be fun now. Roshni laughs seeing him in that attire. They drink coffee. Sid thinks he was waiting for this moment and yearning to see her smile. Roshni slips and falls on him. Baarish ke paani me song.

Roshni feels cold. Sid covers her with shawl and asks if she is fine now. Roshni nods yes. Later Neil and Naina come to office. Naina says Roshni might be alone in the office. They see Roshni sleeping on Sid’s shoulder. Neil tells Naina that he will wait in the car. Roshni wakes up and clarifies Neil that he is misunderstanding them. He asks Sid what he is doing here? Sid says he brought inhaler for Naina as he thought she is in office. Naina says why I will come here.

Sid is speechless. Neil says lets go to hospital and bring Anya. Sid says she will not discharge today and he will bring her. Neil goes angrily. Naina comes home. Roshni goes following Neil to clarify. Mitul tells Naina that she knows Ragini being Roshni Patel, daughter of DD Patel. Naina is shocked. Mitul says Neil asked me not to tell you. Naina says Neil knew about it and didn’t inform me. Mitul goes.

Sid thinks he will make everything fine. Anya thinks once they go to London, then they can’t stay together. Atleast Sid stays with her due to family pressure here. Roshni tries to give explanation. Neil says I didn’t ask for any explanation. Roshni says I didn’t see you drinking before. Neil says many things are happening for the first time. He is about to go. Roshni says I will make something for us for dinner. She says we are husband and wife and should resolve the issues. Neil holds her hand tightly. Roshni is shocked and says you are hurting me Neil. Neil pushes her on bed and says I know you like everything except staying with me. Roshni cries badly.

Next morning, Neil asks Ramu to bring coffee for Roshni. Roshni says I have done my breakfast almost. Sid brings Anya home. Naina asks what did Doctor say? Sid says Doctor asked her to take bed rest for a week. Anya says she will do her breakfast in room and asks Sid to bring it. Sid sees marks on Roshni’s hand and wonders why is she hiding it.

Sid is about to go to office. Naina asks him to stay at home and take care of Anya. Sid says he has important work to do in office. Naina bluntly asks him to stay at home and says Neil and Ragini will handle office. Sid says okay. Naina goes. Sid asks Anya what happened to her mum. Anya apologizes to him. Naina comes to DD’s office and asks someone to give DD’s house address. Employee says I don’t think anyone stays there. Naina says I will go and see and takes the address. She reaches DD’s house. A lady opens the door and says she is a new tenant. Naina asks if you know about owners etc. Lady says no and asks her to give letters to DD’s relative if she meets them. Naina takes it and thanks her. She opens the letter and is shocked. She wonders how can it be possible.

Roshni takes her purse and is about to go somewhere. Sid gets water and is coming towards there. Naina reads court notice of divorce application of Roshni and Sid getting rejected, as they didn’t come to court, and that’s why they are still married. Naina is shocked to know that they are married even now. Sid collides with Roshni and water falls on her face. Sid says sorry and wipes her face with his handkerchief, and sees sindoor on it. He goes.

Naina looks at them in shock and comes to her room cryingly. She says a big betrayal….if Roshni and Sid unite then Neil and Anya’s life will be ruined. She says Neil couldn’t bear it and Anya is pregnant with Sid’s child. Mitul calls Naina. Naina hides the papers. Mitul comes and asks what you are hiding in the drawer. Naina says she saw old pics and memories got freshen up. She asks did you want anything. Mitul thinks there is something for sure.

Roshni comes to office. Suddenly flowers falls on her from above surprising her. She sees a sorry letter from Neil. Neil brings chocolate flavor cake and says it is your favorite. Roshni asks why? Neil apologizes to her for hurting her. He bends on his knees apologizing her and sees her hand. He apologizes to her. Roshni asks him to leave her hand. Neil says we shall go on a holiday and says we will just relax. He says we will go on a lunch. Roshni says okay. Anya tells Sid that she wants to eat pani puri. Sid says I can fulfill your wish before going.

Naina talks to Simran and says she don’t want Roshni and Sid to stay together and says it is better if Sid and Anya go from there. She asks Simran to go with Sid and Anya and make sure they stay together, happily. Sid brings Anya to have pani puri. Neil and Roshni are having lunch at a restaurant. Manager comes and calls her Mrs. Khurana, and asks her to enjoy lunch. Neil gets angry and says I am done. Roshni is tensed. Pani puri seller asks Sid about Roshni. Sid gets sad and says she hasn’t come. Anya gets upset.

Sid asks Anya to have pani puri. Roshni tells Neil that she didn’t know that manager will recognize her. She shows the holiday brochure to Neil and says she likes beaches, and asks him to book the tickets. Neil gets happy. Employee comes and informs that someone came from Khurana company. Roshni says yes, she called them.

Bunty talks to Roshni about bridal collection and asks her to go to London for the promotion being CEO of the company. Roshni says she has to talk to Neil and calls him. She tells Neil that Khurana wants her to go to London for bridal collection and seeks his permissions as they have planned for a holiday. Neil asks her to go and come back. Roshni thanks Neil and confirms Bunty. Naina tells Sid and Anya to shift with Simran and Raj and makes an excuse that Raj couldn’t handle alone. Sid and Anya are surprised. Naina says once Anya’s third month completes, she can travel to London.

Neil comes home. Mitul asks Naina, if she has informed him about Sid plans to go to London for few days. Neil is doubtful. Mitul says Anya will go after some days. Neil thinks about Roshni’s words. Roshni talks to Bunty and says she will not go to London as Sid will be going there. She sees Neil coming and cuts the call. Neil asks what happened? Roshni says something is stuck in her neck and goes to washroom. Roshni’s phone rings. Neil picks it. Bunty says I have to talk to Sid about cancelling London trip. Neil cuts the call and thinks what is happening under his nose.

Roshni worries for Neil and calls him. Someone picks the call and says Neil is drunk and is not in his senses. Roshni asks him to tell the address. Neil is lying unconscious on road after heavily drinking. He gets up and tries to walk. Roshni comes in her car and is about to hit him accidently. She gets shocked and asks Neil to come home. Neil says you came again. Roshni looks on. Sid is on the way in his car. Neil asks what do you want Roshni Khurana?

He says I don’t want to go home, slaps and pushes her. Roshni falls down and her bangles breaks. Sid hears the voice and sees Neil and Roshni’s car there. He gets her bangles and picks it up. He recalls Naina making Roshni wear that bangles as a symbol of married life. Roshni looks at her face and cries recalling Neil torturing her. She cries while Fasle song plays. She recalls her marriage with Neil and looks on cryingly. Sid is driving the car and thinks he will find out.

Naina says Ragini is having injury and asks about it. Ragini says she had slipped in bathroom. Mitul asks if neil gave her wound. Neil says arguments happen between husband and wife and makes an excuse. He asks Ragini to sit. She sits on the chair. Neil makes her have cake. Ragini takes cake from her hand. Sid thinks bangles are missing from her one hand, it means it is hers which I found. Ranjeet asks Mitul if she has any plan. Mitul asks him to have patience. She tears the layout of the bridal collection. Ranjeet says what I will do now. Mitul asks him to have patience and laughs.
By Maryam Wokili