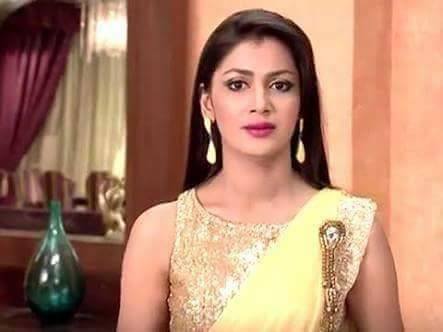 Abhi asking Pragya to give money for Purab and Bulbul’s grand reception. Pragya says she will not give money. Abhi says if she don’t give money then everyone of them will go on a hunger strike. Everyone backs Abhi, including Tanu.

Abhi says I can be hungry to keep up my promise. Pragya gets tensed. Later she asks Dadi, why did she agree for reception. Dadi says it was her idea and asks her to think about Sarla. She says you should have told yes to Abhi. Bulbul says there might be some reason behind her refusal. Purab says may be they would suspect her that she is spending money on her sister.

Pragya thinks she can’t tell what Aaliya was about to do with Bulbul. She says Aaliya might think that they are teasing and celebrating happiness to make her jealous. She fears of Aaliya’s reaction and says the person who is with Aaliya might do anything.

Dadi asks her not to worry and asks her to sit. She explains to her that if people stop driving vehicles with the fear of accident. She says it is safe to take precaution and asks her to say yes to Abhi. She says we shall celebrate the jashn so that we can tell our kids later. Dadi says Abhi is very much stubborn and will not eat food if you refuse. She asks her to say yes to Abhi.
Aaliya comes to meet Vijay and asks where were you, I was waiting for you. Vijay says he came secretly saving himself from security and asks where is security? Aaliya says you didn’t do my work. Vijay says I have done my work, but your brother saved her. Aaliya says Pragya might be dead by now, but still alive because of you, Vijay asks do you think that I will do the same work in that money.

Aaliya says I know you won’t do with that money. Vijay asks for double money from her. Aaliya says okay, and says you will get money after Pragya is killed and cremated. Vijay agrees and says your friends should also not know about it. Aaliya says she also want to say the same thing that Tanu and Raj shall not know about their deal. Vijay says he will kill her and people will think it is an accident.Abhi thinks Pragya has become stone hearted and is not reluctant to spend money on her sister’s reception. He gets hungry, but makes himself understand that he has promised Dadi so can’t cheat her. He talks to Pragya’s toy and takes out his anger on it. Pragya comes and agrees to give money. Abhi says I don’t trust you and asks her to tell infront of all. He says if you want me to agree then come and tell outside. He comes out and calls everyone saying it is a good news.

Mitali asks did you bring food? Abhi says hunger strike is called off. Tanu asks how did it happen? Abhi asks Pragya to tell everyone that she is ready to give money. Pragya says I am ready to give money for reception so you all please have food. Mitali and Tai ji say that they shall have food fast. Abhi says I am not done yet and asks Pragya to apologize to him for insulting him and refusing to give money.Dadi asks him to leave the matter and says it is okay. Abhi says she shall realize her mistake and should know how it feels when someone decision is dismissed. Pragya says I am sorry that I had dismissed rockstar Abhi’s decision. Abhi says do you really saying sorry? He ends the strike. Aaliya thinks it is good that reception will happen, and she can keep eye on Purab, Bulbul and Pragya. Pragya comes infront of her and asks why she didn’t go for dinner.

Aaliya says she is very much pained and don’t want to have food. She asks her to expose her infront of everyone, and asks her not to play mind games. She says you asked me to forget Purab, gave big lectures etc. She says I love Purab genuinely, and says I haven’t acted to love him or played with his feelings like you does with my brother. Pragya says I don’t want reception to happen, but agreed for Abhi. Aaliya says nobody can see her pain and if something wrong happens then everyone will blame her. Tanu hears her. Aaliya asks her to do one favor and asks her not to take about Purab, leave her alone. Tanu thinks if Aaliya was acting or really crying.Aaliya comes to room angrily. Tanu asks if you was really crying. Aaliya asks what shall I do? Tanu asks her to cry infront of her and unburden her heart. Aaliya says I was just acting to cry so that Pragya shouldn’t suspect what is going to happen with her. Tanu asks what do you mean? Aaliya refuses to tell her anything and makes plan on how to murder Pragya.Abhi driving the car. Pragya asks Bulbul and Purab to take cheap outfits for their reception. Bulbul says she will not look nice in cheap clothes. Abhi asks Pragya not to take clothes instead and says she will look like a naagin. They argue. Abhi says mall have come. Pragya gives them one hour to shop. They get down the car. Abhi sees Vijay and thinks he is the one who had accused me. He follows him secretly, sees him going towards a car and talking to someone. Aaliya is inside the car. She gets shocked seeing Abhi. Abhi comes near the car and looks at Aaliya and Vijay. Aaliya signs Vijay to run.

Vijay runs hitting Abhi on his forehead. Aaliya comes there and tells Abhi that she will take him to doctor. Abhi asks what you was doing with this man. Aaliya says I met him because of you and says I couldn’t believe when he accused you. I wanted to know who is that person trapping you. Aaliya acts innocent and says nobody can accuse my brother. Abhi says I can understand your concern, but if anything happens to you then…Aaliya says I won’t leave that person who is behind everything. She asks him to come to doctor and get treatment. Abhi says it is a small injury and asks her to go home. Aaliya thinks she will burn Bulbul’s celebration, just wait and watch.

Abhi enters the mall. Pragya, Bulbul and Purab see his injury. Pragya panics and asks what happened to him. Purab asks someone to bring first aid box. Sales girl comes and says rockstar Abhi is here. She sits beside him and does first aid. Pragya gets jealous and scolds the sales girl as she takes selfie with Abhi. She asks Purab and Bulbul to shop fast. She does his first aid and blows on his injury. Abhi says don’t know if you are heroine or vamp. Pragya pretends as if Bulbul called and goes.Dadi and Dasi come to Sarla’s house. Sarla asks Jhanki to make tea. Dadi asks her not to do formalities, and gives sweets saying there is Purab and Bulbul’s reception at their house. Sarla says reception will need money. Dadi asks her not to worry and bless the newly weds. Bulbul tells Purab that she is tired, but haven’t like anything. She says she will try the outfits for the special day.

Bulbul says she will try short top. Just then they were getting romantic. Aaliya secretly sees them together. They were interrupted by someone. Bulbul asks Purab to come to terrace at 9 pm. Aaliya hears her. Abhi and Pragya argue. Abhi says he will wear torn clothes at the reception, and says he will shout and tell everyone.

Pragya asks him to buy something, but not too costly. Abhi asks salesman to show expensive clothes of the store. He selects one suit for 20000 Rs. and asks salesman to add one zero and offer bribe. Pragya calls the manager. Manager apologizes and says it is of 20000. Salesman tells that he was saying that. Abhi says customer is always right.Aaliya coming to the store and asks sales girl about the restricted room in the shop. The girl tells about the room. Aaliya asks how much she earns in a day or monthly. Salesgirl says she earns 10000 per month. Aaliya says she will give her 2000 Rs and asks her to take Pragya to that restricted room, and accuse her for stealing money. Sales girl agrees. Tanu tells Raj that Aaliya haven’t tell her anything about her planning. She is angry at her. Mitali comes and thinks Tanu is angry at Raj. She scolds her and warns her to stay away from her husband.Sales girl sends Pragya to that restricted room and locks her. Aaliya asks her to inform manager. Manager knocks on the door and tells that one lady has entered inside with the will to steal cash and documents. Pragya comes out and asks why they were knocking on the trial room. Manager says you went to restricted area to steal the money. Pragya asks what nonsense. She apologizes and says she didn’t read that. Manager says I know well that your type of girls.

Pragya says yes, I am. Abhi thinks it is good and recalls Pragya’s concern for him. He asks the manager how can he call her the thief. Manager asks who is she? Abhi says she can buy your store in one go. He says Pragya is his boss. Manager apologizes. Bulbul asks Pragya to buy the store and kick manager out of job. Manager apologizes. Abhi thanks Pragya for the gift.Aaliya thinks her own brother has failed her plan. She thinks she will call Vijay. Just then Raj and Tanu come there. Raj asks did you go to meet Vijay? Aaliya says yes and asks who told you this? Raj says I know and says I thought Abhi send you to jail. Aaliya says she has fooled Abhi like always and tells everything. Raj says Vijay called and told me. Aaliya says she wants to know who is helping Pragya and that’s why went to meet Vijay.
By Maryam Wokili