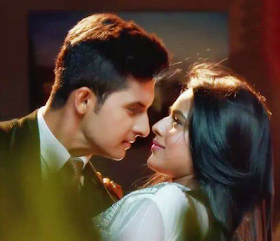 Sid recalling DD’s hatred for him. A sad song plays while he recalls his daughter’s words to save her. He feels lost and says I am a failure repeatedly. He cries badly and calls him failure again and again. He says I couldn’t anything for my family, daughter and have failed. Yash calls Sid and sees his phone switched off. He says what do you think that you will saved from my torture. He says I won’t let you live. Just then he hears Roshni shouting Sid…..
DD, Roshni and Resham are in the hospital. DD asks Roshni not to cry and says nothing will happen to him. Roshni asks her to stop it and blames DD for Sid’s condition. She says if anything happens to him then I will die. Simran and Raj come there. Roshni hugs Simran and cries. Simran says nothing will happento him. DD tells them that she had scolded him, but don’t want anything bad happen to him. Doctor comes out and informs them that Sid is alive, but he is in coma. Simran tells Roshni that nothing will happen to Sid. Roshni cries. Yash looks at Sid through the door. Later Yash sees Roshni sleeping and comes to Sid’s ward. He sits at his bed side, and says how can you leave us Sid. He smiles seeing his comatose state. He gets up and says how can I let you have a easy death. He says my revenge is incomplete till now and places his hand on his head. He talks in joker’s voice and says this game is still on. He sings a poem, Mary had a little lamb…He says mad fellow, you didn’t know who is joker and what is his intention. He says shall I tell you a secret…..He says I am that joker and smiles. He says Joker is right infront of you and asks him to come back to live, as his revenge is not completed yet. He says death will not kill you, but I will kill you. He holds his oxygen mask and says I will give you a painful death, it is a joker’s promise.Once Yash leaves from there, Sid opens his eyes and removes his oxygen mask. He says Yash……and gets teary eyes. He says why you Yash? He says I have never thought that you are behind that joker’s mask. I thought of you as my friend and brother, but you have stabbed at my back. You have done wrong by risking my Roshni’s life and kidnapping my daughter. He says I can forgive you 1000’s times, but not for my family. You are living a double life and promises to reveal his face to everyone and end his double life.Yash tries to console Roshni and says Sid will be fine, don’t worry. Sid looks at him and promises to make him pay for his crimes. He says I will end your double life. He says God have given me more challenges, but have given me more strength to overcome the troubles. Sid recalls thinking to defeat joker and makes a plan. He says I will hit you the most it hurts joker. I will hurt your ego and when your ego is hurt, your identity will be revealed. He says I will give you a rigorous punishment, and that God too will be happy seeing you punished.Sid calls Pinto and asks if he is ready. He asks him not to care for his life and says go for it. Pinto hits Sid with the car. Sid gets hurt. Doctor asks Sid why you have done this? Sid says I will save my daughter and wife, and says you please help me. He says tell my family that I am in coma, and this message will reach my enemy. Doctor says okay, I will help you and asks him to rest. Fb ends. Sid says I will make you cry blo*dy tears Yash and it is a promise. Roshni praying for Sid’s recovery and thinks she shall take help of Yash to save Ayesha. Just then Doctor comes out and informs them there is no recovery in Sid. Yash says then we will shift him to other hospital. Sid thinks no, and hopes Doctor handles him well. Doctor tells Yash that he can take Sid from there, but then if anything happens to Sid then he will not be responsible. Doctor recalls Sid insisting to meet Roshni alone and asks Yash to come with her. Roshni comes there and cries seeing his condition. Dholna song plays…………………..Simran and Raj come there. Simran asks Sid to open his eyes and cries. Sid feels helpless to not being able to reveal his true condition and thinks Yash will get to know that he is acting if he speaks to anyone. Yash asks Roshni if she is hiding something from him. Roshni is about to tell him about Ayesha, just then DD, Kesar and Resham come there. DD asks Roshni if Sid is fine? Roshni says no recovery in him. DD says he will be fine. Yash asks Roshni again what she was saying? Just then Sid opens his eyes, Resham sees him with open eyes and shouts as if she has seen a ghost. Doctor comes and says his heart rate, pulse and bp are all low and it is impossible for him to open his eyes in weak condition. Yash looks on. Kesar takes Resham with him. Raj tells everyone that he have talked to a surgeon about Sid and called him here. Yash tells Roshni that he will stay with her in the night.

Later Sid meets Roshni and says Yash is a joker. Roshni doesn’t listen to him and asks him to be in his room. Sid tells her again that Yash is a joker and is behind all the attacks on Ayesha, DD and her. Roshni says he is my childhood friend. Sid says he is sure and says he acted to bring Joker’s truth out. Roshni says I will not leave him.Sid says our daughter is still with him and says Pinto have an idea about Ayesha’s location. He says once we get her, we will make Yash lose. Yash gets a call from the goon and goes to meet him. Goon tells him that Ayesha is troubling him and it is very difficult to handle her. He tells about the place which Roshni and Sid hears. Sid says he will follow the goons and asks her to handle in the hospital. She thinks Yash have betrayed them big and is angry. Resham comes there, and says she came to tie the taveez. Roshni gets tensed and says Sid is a guy and nurse is changing his clothes. Resham says I will tie taveez with my eyes closed. Roshni locks Resham in the room.Yash takes out money bag to be given to his goon. Sid sees DD and thinks she will get him caught. Yash collides with DD and the money bag falls and open up. DD asks what is he doing with lots of money here. Yash says he brought money to be given to Doctor, and says he will ask Doctor to save him. DD thanks and blesses him, says she and Khurana’s will take care of the hospital bill. Resham asks Roshni if nurse changed Sid’s clothes. She opens the tab and finds water fallen on her. She opens the cloth from her eyes and gets tensed. She knocks on the door. Nurse opens the door. Resham comes out and thinks to tie black thread on his feet.DD asking Roshni about Sid. Roshni says there is no improvement in him and he is still in coma. Resham goes to Sid’s room and finds pillows instead. She shouts ghosts. She comes out of ward and says it is a ghost. DD asks her to shut her mouth and asks why is she behaving madly. Resham tells her that there is a pillow on the bed instead of Sid. Roshni thinks truth will come out and asks DD to take Resham there, else other patients will complain. Resham insists and asks DD to believe on her sayings. She asks DD to check the room. DD says okay. Roshni asks DD to stop and says Sid is resting. DD says once Resham confirms Sid is here, she will not come again to hospital. Resham sees Sid sleeping on bed and shouts. Roshni tells Resham that she needs more rest than Sid. Yash comes and asks what happened? Roshni says nothing. She thinks to kill him. She asks Yash to drop DD and Resham home. He agrees. Roshni says thank god you came back. Sid recalls getting Roshni’s message and coming back on time. He tells her that joker have kept Ayesha in Sanpada, and says he has a plan. Resham thinks nobody was believing me in the hospital. Yash asks what happened? Resham says I think……Sid…Roshni comes there just then. Resham says I think Sid….Roshni shouts and shouts Chachi…..She tells Yash that she needs a favor from him and says she wants to go to temple which is outside Mumbai. She says Mom will not allow me if she is here, and cries. Yash says okay. Roshni thanks him and leaves.Ayesha is seen with the kidnappers and says she wants to go. Shabnam and Sid dances in the same locality and sing song..The goon sees Shabnam and says he will not leave her. Sid and Shabnam continue to sing and dance. Roshni rings the temple bell and asks God to give them strength to end evil and bring Ayesha home. She does the aarti. Yash asks if you are done, lets go. Roshni tells him that she have to do parikrama of the tree, as told by Nani. Yash says okay, do. Roshni ties the thread on to the tree and do parikrama. She thinks Yash will cry and wonders why did he play the game. Sid and Shabnam are about to go with their toy stuff. The goons stop them and ask to show toy. Sid looks inside and finds a joker toy inside. Sid asks the goons to buy the toys. Shabnam also asks him to buy it. The goons look at Shabnam with lust and buy the toys. Sid asks Shabnam to come. He tells her that he has seen same toys in that house, and says Ayesha is there in the house. He says there is a camera in the toys and says it will be revealed if Ayesha is there. They couldn’t see her. Sid tells Shabnam that Yash will return soon. DD prays for Sid’s recovery and peeps inside the ward. Resham comes to the hospital and thinks to find out about Sid. Roshni calls Sid and tells him that Yash is planning dangerously and have talked to someone about a flight. Shabnam tells Sid that she will engage goon and shares her plan.
By Maryam Wokili