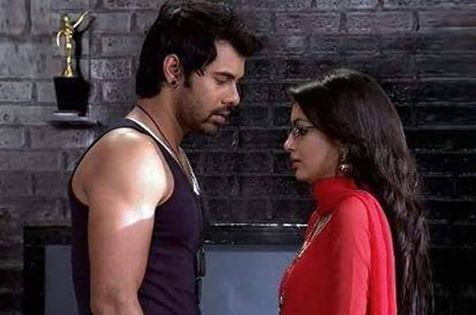 Dadi reaches restaurant to talk to Pragya, Purab and Bulbul. Pragya tells them that Tanu got angry and held her neck when she provoked her. Dadi says Tanu is thinking you want to create misunderstanding between them. Bulbul gets an idea and says they will make Abhi scold Tanu when he sees her not taking care of baby. She says Tanu will dance in Dussera and then Jiju will scold her. Pragya doesn’t like the idea and says she can’t play with baby’s life. Dadi says I am with her. Purab says I don’t think so and asks her to think about other idea. He goes to bring chocolate for her. Bulbul thinks she is stuck between them.Tanu tells Abhi that you called me at right side of bed and tells what Pragya has told. Tanu says you don’t love me and I know. Abhi says you are at my left side of heart, so I called you at right side. Tanu says I will leave the house with baby. Abhi asks her not to cry. Pragya hears them. Abhi asks her to take rest. Pragya thinks Abhi is angry and she shall not go near him............Sarla gets ready. Bulbul gives her compliment and leaves with her. Pragya asks Ronnie to check arrangements. She asks everyone to rehearse for Ram Leela. Sarla comes and greets Dadi. She looks at Pragya and looks on. Pragya asks Dadi to rehearse her part. Dadi welcomes the guests and says she wants to call Ajay Mehra who is playing Dasharath’s role. Dasi comes and enacts her role. Aaliya comes and says she will play Sita’s role and rehearse the lines. Pragya says you can’t do acting and asks her to leave it. Aaliya says who are you to judge me. I am not interested, but you have forced me. Ronnie says you can’t do it. Pragya asks him to keep quiet.Dadi calls upon Sarla to rehearse her lines. Sarla enacts as Mata Ansuyya. Sarla tells about woman duties towards her husband. She says a woman who gives more preference to other things, can’t be happy. Even if she stays in Palace without obeying her husband then she can’t be happy. Pragya gets teary eyes and hides her face.Sarla rehearsing for Ram Leela and tells a wife should obey her husband and fulfill her duty towards her husband. She says if she stays in palace and doesn’t follow her wife’s duties then she can’t be happy. Everyone claps for her. Pragya gets emotional. Aaliya says they are both dramebaaz. Pragya says atleast someone said her dialogues perfectly. Bulbul says I am so proud of you. Jhanki says you have touched my heart. Dadi calls Mitali and Taiji for Mantra and Kaikiye roles. They argue and start their usual saas bahu fight. Pragya asks them to stop it and be serious with their dialogues. She says Sponsors will not leave her if performance falls weak. Aaliya and Tanu leave. Dadi praises Sarla’s performance as Mata Ansuya. Sarla says she needs to go. Dadi says I willask driver to drop you.Purab reads some papers about sponsors names and is surprised as the sponsors agreed to give crores because of Pragya. He praises Pragya and says she has some skills. Abhi says I don’t do small things. Purab asks him to have partnership with her, and says you will earn much. Abhi says I don’t need her help, but needs yours. He says she makes me cry, create misunderstanding between me and Tanu etc. I want to take revenge from her, and want to torture her. Purab says I will talk to Bulbul and asks for an idea. He asks him to think about a plan.Dadi tells Pragya that they don’t know Tanu much, but they know Aaliya well. She says we shall expose Aaliya first. She says we have to make plan and know her weakness. Pragya says Aaliya’s weakness is money and marriage which was broken twice with Purab. Dadi says I will provoked her and talk about her marriage. She asks Pragya to make Aaliya angry with her provocative words. Pragya says you are superb. She says Aaliya will meet the person who is helping her.Mitali tells that she is very hungry. Ronnie asks her to have something. Pragya comes and says everyone is looking happy. She signs Dadi. Dadi asks Dasi, if there is a good guy in her Pind. Dasi says there is young boys in her Pind, and asks why she is asking? Dadi says I am in tension and worried for Aaliya’s marriage. Aaliya says marriage will happen. Dadi asks her to keep quiet and asks Dasi. Dasi says there are many boys, but not for Aaliya. Dadi asks what do you mean? Raj comes and hears them from far. Dasi asks her to search for Mumbai guy. Aaliya asks them not to worry and says whenever she say yes, many boys will stand in queue to marry her. Pragya asks her to tell about the boys who will stand in queue.

Aaliya asks her to mind her matter. Pragya says my money will be spend in your marriage, so it is my matter. She says nobody would want to marry you. Aaliya says it is enough and you are crossing your limits. She asks until when she will refer other’s rejection as her excuse not to marry. Aaliya says you are crossing your limits. Pragya says your past saying it all. You wanted to marry Purab twice, but he didn’t want to marry you even after knowing you from many years. She says I am happy as Purab’s life is not spoiled. Aaliya asks her to keep quiet else…………….Pragya asks her to get marry and show her. She says a good man will never marry you, and even my assistant will not agree. She asks Ronnie if he will marry her. Ronnie is silent and doesn’t reply. Pragya says Ronnie don’t want to reply, your line is finished before its start.
By Maryam Wokili