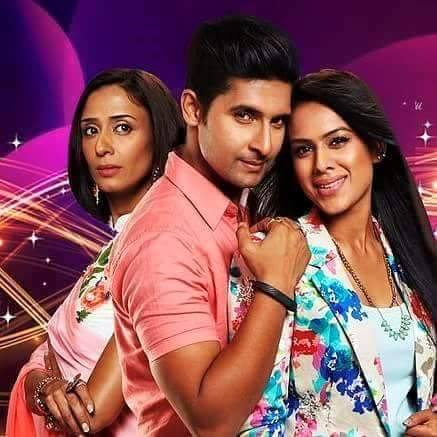 Roshni and Sid are seated together on the cradle. Sid feels bad for Yash and says Sam have made his life miserable. Roshni says Sam is her sister and needs to change. She says she is very much insecure and wants me to react like her. She gets DD’s call and goes. Sid calls reception and asks them to plan romantic dinner for two couples. He thinks to make tonight special for them, and hopes the differences will be cleared between them. Someone comes and keeps hand on Sid’s neck. Sid turns. The man removes his hand.Roshni standing near the cliff, when someone keeps hand on her shoulder and says sorry. She steps back and then comes to Sid. Sid says he has organized a dinner in the evening to bring spark in Sam and Yash’s relation and to make everything fine. Roshni gets happy. They come to room and see the door open. Sid says it is a strange hotel. Roshni says I hope nothing is stolen. Waiter comes and says he has cleaned the room and changed the towel. He says Alex asked me to take special care of you. Sid asks who the hell is Alex? A girl is shown, with whom Sid flirted in the pool. Waiter says he is doing his duty. Roshni asks him to leave. She tells Sid that she will massage him.......Alex is shown. She says do you think Sid that you can manage all? Sid and Roshni come for dinner.Sid tells that all girls hurry up to see the surprise. Roshni asks shall I open my eyes. Sid says yes. Roshni sees the arrangement and gets happy. Sam and Yash also comes there. Sid asks Yash, how did he manage to do this arrangements. Yash looks surprised. Sam gets impressed. Sid says Yash is gracious to call us here. Yash says we are all family. Alex sings song. They go on a dance floor and dances. Roshni tells Sid that she knows that he has done this, and asks how could you be so selfless, and says I love you. Alex sings and roams around them. The man who is monitoring the cameras at DD’s house, comes as a waiter. Alex makes Sid have a drink with her hand. Sid feels dizzy and loses his senses partially. Yash asks Sid, what happened? Sid says dizzyness and jokes it is because of age. Yash says lets have dinner together.Alex pushes Sid and asks how dare you to follow me in the ladies washroom. Roshni asks Sid what happened? Sid says his head is shaking and he don’t know what happened? Roshni looks at Alex. Resham looks at the mirror. The man who is monitoring the hidden cam gets tensed. Resham wipes the lip stick mark on the mirror. Alex blames Sid for flirting with her. Sid apologizes to her. Alex asks Roshni to take care of her husband. Sid tells that he don’t know what happened? Alex smirks. Sam says who will believe him. This is his reality? He is fooling my sister? She says best couple, my foot. Roshni says we will take part in this competition. She tells Sid that she trusts him blindly and asks him not to explain anything. Alex smiles. Sid says they are raising question on us, and we should reply. Sam asks Yash to come and takes him forcibly. Alex smirks and says Sid…I will make you zero. Sh says game have just began, just see what happens.All the couples take part in the competition. The host tells about the first round treasure hunt and asks them to sign on the papers. Alex looks at them though the binoculars. They sign without reading. Sam tells Yash that they have to win anyhow. Yash asks her not to pressurize him to win. Sid asks Roshni, did you see this contract and says something is wrong. Roshni asks him to sign and not to make excuses. Sid refuses to take part. Sam asks Sid, if he got scared before playing. Sid refuses and tries to leave. Alex gets tensed and thinks if he don’t sign then it will be a problem. Roshni emotionally blackmails Sid and asks him to take part. Sid agrees. Alex thinks Sid gets defeated by his wife always. Sid and Roshni signs on the papers. Alex gets happy and smiles.The host announces about the rapid fire round. He says if husband don’t give right answer then wives will be punished. He starts questioning with the couples. The wives get punished for the wrong answers.. Yash and Sam’s turn comes. Yash answers two right answer and 1 wrong. They throw water on Sam. Sam shouts. Sid turns comes. Sid answers all answers right. Roshni hugs him. The host says game is not over yet. He asks Sid to put ball in the basket, else Roshni will be tied and thrown in the water, and then she have to find the keys to the treasure. Sid asks what is this nonsense game. He says we are opting out of the game. Roshni says we will play the game. She asks Sid to agree. Sid agrees and takes the basketball. Roshni says come on Sid. Sid throws the ball in the basket. Everyone looks on.
By Maryam Wokili