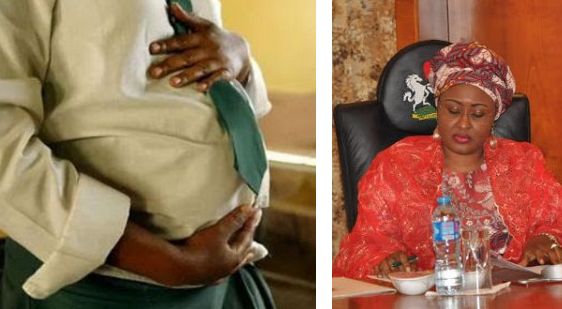 The wife of the President, Aisha Buhari, has indicated interest in the case of a 16-year-old student of Day Secondary School, Tunga, Minna, Niger State, who was allegedly raped and impregnated by the Vice Principal of the school, Muhammad Muhammed.
The victim is a Junior Secondary School 3 student.A source said the President’s wife had upon learning about the case contacted the wife of the Niger State Governor, Dr. Amina Bello, telling her to ensure that justice was done in the matter.The governor’s wife, it was learnt, in turn spoke with the Director General of the Niger State Child Rights Office, asking that the matter be handled diligently in order to ensure justice.

The accused person, who appeared in court on Monday, was accused of contravening sections 19 and 25 of the state’s Child Rights Act.

The prosecutor, Abdullahi Maiyaki, told the court that the accused person had s3x with the girl three times in his office.

However, the accused person said though he had s3x with her, it was only once.

The magistrate adjourned the case till April 5, for further hearing and ordered that Muhammad be remanded in the prison.
By Maryam Wokili