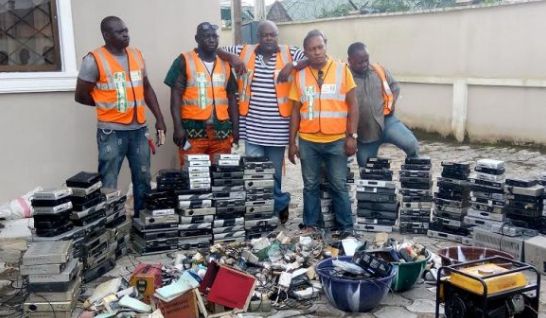 In line with its on-going fight against piracy, the Nigerian Copyright Commission (NCC) carried out an anti-piracy raid at Awodi-Ora Estate within Apapa area of Lagos on 29th March, 2017.The anti-piracy operation was targeted at warehouses in Apapa suspected to be carrying out illegal storage of pirated books without the consent of the Copyright Owners.During the operation, operatives of the Commission led by the Director/Zonal Manager of the Lagos Office, Barrister Obi Ezeilo, carried out thorough inspection of the seven warehouses located at No 47 Dada Onijamah Street, Apapa and all the warehouses were found to contain several thousands of boxes of pirated textbooks, motivational books, bibles, dictionaries and medical & health books belonging to various publishers.The anti-piracy raid followed series of surveillance and intelligence gathering made by the Commission within Apapa environs which provided facts leading to the targeted location and business place where illegal storage of the pirated literary works was taking place.The anti-piracy operation, which was carried out by a team of Copyright Inspectors with the effective support of the Nigerian Police Force , led to the confiscation of thousands of boxes of pirated books by the Commission.Among the confiscated pirated books are, "Songs of Praise" belonging to University Press, "Mastering Steps to Numbers For Beginners" belonging to Metropolitan Publishers, "Engineering Mathematics" belonging to Macmillian, "Oxford Dictionary" belonging to University Press, "Modular English Course" belonging to Evans Publishers, "Champion Mathematics" belonging to Macmillian, "Primary Mathematics Workbook" belonging to University Press Plc, "Living as God’s Children" belonging to African University Press, "Holy Bible" belonging to Holman Publishers, "Social Studies" belonging to Lantern Publishers, "Nature Notebooks" belonging to Superline and "Senior English Project for Senior Secondary Schools" belonging to Longman Publishers.However throughout the anti-piracy raid of the said location, none of the owners or operators of the warehouses were found within and around of the premises, only the landlord of the premises Anthony Iwuala showed up and he said he was not aware that the warehouses were being used for the storage of pirated literary works.

Speaking on the matter, the Director/Zonal Manager of the Commission’s Lagos Office, Barrister Obi Ezeilo said that the Commission will carry out further investigation to fish out the actual owners of the warehouses and prosecute them. He warned people who are involved in piracy to desist from such act. He affirmed that the Commission has a zero tolerance for piracy. He also warned those who own warehouses to ensure that their premises are not used for illegal activities.

The estimated value of the seized pirated books is put at N600 Million.