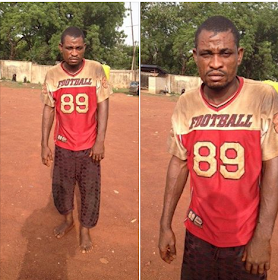 Read the press statement by the Enugu State Police Command.

Gradually land acquisition is beginning to gain prominence because of its economic value amongst others but the same land usually serve as man''s final resting place as he will be committed to the earth following his death.The history of land dispute is always associated with evil and sometimes loss of lives and properties.

On that fateful day being 4th of march,2017 at about few minutes to 8pm at Ukpata Community of Uzouwani Local Government Area of Enugu state, Suspect identified as Daniel Ekemezie Alias Bakasi and a father of two and an acclaimed mathematics teacher with ukpata community secondary school in uzouwani Local Government Area of Enugu Coalcity state had allegedly left his house in Ukpata community and headed to his uncle''s place patrick Odoh now deceased and believed to be about 83 years. According to the suspect,he had left to his uncle''s place with the intention to ensure that he is sent to the great beyond in other to settle their age long family land dispute. He disclosed that on getting to the place, he woke Patrick his uncle up and informing him that he has an issue of discussions with him and when he woke up, he now tied his mouth with cloths to avoid shouting and whisked him quietly that evening to Iyimkpafu/Ofiakputu forest at Ukpata where he tied Patrick odoh on the tree with rope and left him till 8th march 2017 when according to him, the victim was seen to have given up the ghost.He further disclosed that on noticing that the victim is now dead, he hurriedly buried him in a shallow grave and left.The Enugu state police command through its operatives of the Anti Kidnapping Unit acting on intelligence information promptly nabbed the suspect who disclosed what allegedly transpired between him and his late uncle and claiming that they have been in an agelong land dispute.Suspect is helping the operatives in their investigations as he has also guided the operatives in the recovery of the decomposed corpse of late PA Patrick from the shallow grave inside the forest on 4th April,2017. Suspect is regretting his evil act which he blamed as act of devil."I want to tell people to distance themselves from any issue of dragging of lands because it can lead to loss of lives and properties. I want the son of late Pa Patrick odoh to forgive me and even take the land. Am ready to leave the land for them. I am regretting my action now.I recently lost my wife and I am left alone with my two kids. God please help me" stated the suspect.