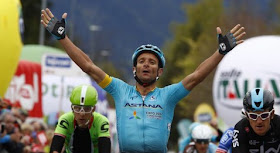 Italian cyclist Michele Scarponi has died after being hit by a van while training on his bike.  The fatal crash happened on a crossroad near his home in central Italy today.


According to initial reports, Scarponi died on the spot and was unable to be revived by emergency services which arrived promptly.

"This is a tragedy too big to be written. We left a great champion and a special guy, always smiling in every situation, he was a real mile stone and a landmark for everyone in the Astana Pro Team," his team said.

The Italian was one of the most liked riders on the circuit and there was an outpouring of sympathy in the cycling world.
By Maryam Wokili