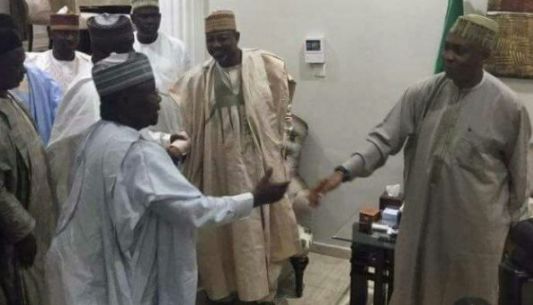 Gov. Kashim Shettima of Borno led a delegation from the state to Senate President Bukola Saraki at the National Assembly on Friday.
The visit comes 2 days after the senate handed a 6-month suspension to Ali Ndume, a senator from his state, because he called for an investigation into allegations against Saraki and Dino.Although details of the meeting with Saraki was not made public, there are strong indications that it is connected with the action taken against Ndume.


In Shettima’s delegation were Adamu Timpta, a close associate of Ndume and son of the emir of Gwoza; Abubakar Kyari, senator representing Borno central, and some influential personalities.

On Thursday, youth in Biu, a town in Borno, trooped to the streets to protest the Senate's action.

A non-governmental organisation (NGO) also gave the senate a 48-hour ultimatum to reverse its decision or face court action.
By Maryam Wokili