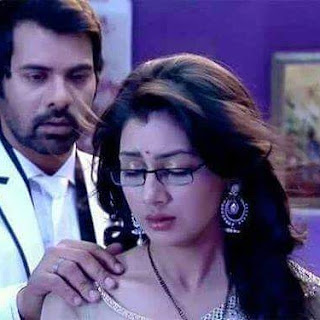 Abhi and Pragya crying hugging each other after hearing about Tanu’s positive pregnancy test. Pragya says he hasto accept and apologize Tanu as he does not what society think about unmarried mother. Sarla informs Biji that she saw Pragya in hospital OB-GYN room and got happy thinking she is pregnant, but she is not. Biji says just like daadi, even she wants to see her grand child. They both share a lighter moment.
Abhi apologizes Tanu for Pragya’s sake. She hugs him. Dumb Pragya tries to leave, but he holds her hand adn signals not to go. She frres her hand and walks out. Teary eyed Abhi sees her leaving helplessly. Tanu tells Abhi she is very happy that he accepted her and goes to inform someone. Abhi runs behind Pragya, sees her getting into taxi and runs behind taxi with no success. Pragya reaches home and reminisces Abhi’s love for her and thinks why she wants to stop Abhi and getting emotional, how will she give daadi her great grand child and bring back happiness in this house, how will make daadi accept tanu. She enters Daadi’s room and cries seeing her. Daadi senses her presence and wakes up calling her name, but does not see her. Pragya hides. Daadi looks at Pragya’s pic and thinks why did she call her and missing her so much.Aaliya follows Purab and sees him meeting a man. Once he leaves, she introduces man as Purab’s friend and asks what did he speak to him. He says he wanted a gift for party, so he is helping him. Aaliya thinks even today, she will not be able to execute her plan. Pragya comes to Abhi’s room, sees him sitting in dark and asks why is he sitting in dark. He says he cannot face daadi as she got him married to Pragya with so much hope, but he could not keep her hope and faith and needs to be punished. She goes to switch on light and sees blood on switch. She gets worried and sees his hand in a pool of blood. She asks why did he do this. He says it is a punishment for his bad deeds. She nurses his wound and says again he as to accept Tanu as she is his future and his child’s mother, she has promised tanu to get her the respect she deserves.Pragya telling Abhi that he should accept Tanu and forget her. He says Daadi accepted her got him married to her, then how will she accept Tanu. Pragya wiping Abhi’s blood on shattered glass tells only Tanu can give daadi happiness and once she gets a great grandchild, she will forget her. She lived here happily til the day she was here and can spend rest of life with the memories, so he should not feel guilty for her.Tanu in her house jumps in happiness that Abhi accepted her in front of Pragya and says even before being born, her child is so lucky for her. She further thinks that Pragya herself is giving her place, else she would have to use her child for emotional atyachar.Pragya tells Abhi that he is habituated to her like Daadi and soon he will forget her once Tanu will come in his life. He asks if she really meant she loves him the other day. She says she respects him, but does not love him, so he should forget her. He starts crying. She thinks how to bring Tanu in this house.


Abhi wakes up in the morning and sees Pragya standing in front of him. She gives him coffee and asks how is his pain. He says it is fine and asks her to sit. She sits. He asks if changes cannot be made. She asks what changes. He says he, aaliya and Tanu could not get her out of house, now she herself wants to go. How will she bring Tanu here and also herself stay here. She says if she wants to bring Tanu here, she has to get out of here. She smiles and says he will get his way and she will spend the rest of her life with sweet memories. She then asks him to finish his coffee and tries to leave. He stops her and then says nothing. Ishq bulawa…song… plays in the background.Aaliya asks her friends to help her spend some time with Purab. Purab passes by, one of friend keeps his leg on the way and makes him fall on Aaliya. He asks why is she in bangalore. she says she came on a college reunion with her friends. He says if he knew she is coming to same hotel, he would informed her. One of friend says Aaliya did not want to come for river ride alone, so she can come with him. He says he cannot as he promised Bulbul that he will shop for her and leaves once he gets Bulbul’s call, irking Aaliya.Sarla comes to Abhi’s house and tells Daadi that she came to meet Pragya. Pragya sees her, calls and asks where is she. She says she came to meet her. Pragya says she is near house’s gurdwara and asks her to come there right now. Sarla excuses Daadi and says she got some important work. Daadi asks if everything is fine. Sarla says everything is fine, asks her to take care of herself and leaves. Abhi asks Pragya to answer his question. She says she is busy and leaves.Tanu calling Pragya and asks if she find for a way. Pragya says she couldn’t think of a way and asks her to have patience. She disconnects the call. Tanu thinks she will be left alone, if Pragya couldn’t do anything. Rachna sees vegetable burning on the gas and calls Pragya. Pragya apologizes and says she was thinking something. Rachna says she will make food again. Pragya gets an idea and thinks she have to bring Tanu home as this is the only way out. She asks Rachna to make saag and says she will send Rachna for help. Dadi says she wants to talk to Pragya. Pragya says she has some important work. Dasi asks her to listen to Dadi once. Pragya says she won’t stop for anyone. Rachna asks Dadi not to feel bad as Pragya is stressed out.
By Maryam Wokili