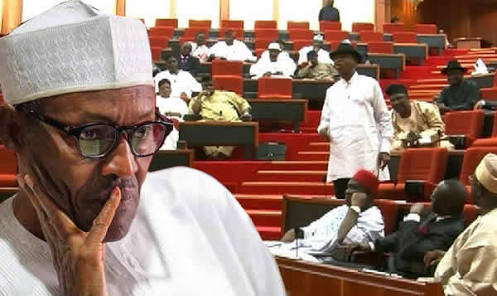 The Nigerian senate has stepped down on confirmation of President Buhari's 27 REC nominees in protest against Ibrahim Magu's continued headship of EFCC.The Senators made the decision at Tuesday's plenary over what they termed as "Buhari's appointees disrespect to the senate."Sen. Anyanwu, while speaking at the plenary said "If the Senate is ridiculed our institution has been ridiculed, we will try as much as possible to promote this institution"Senator Francis Alimikhena who also supported the motion, said "Lets hear from Muhammadu Buhari on Magu's case, Magu is terrorising us, because we disqualified him."Deputy Senate President, Ike Ekweremadu said there's a time frame to stand down the confirmation and implored the Senate President Bukola Saraki to convey their feelings to Mr. President.Senate President Bukola Saraki then put the question and the Confirmation of INEC RECs was suspended for two weeks.


Looks like Magu is a BIG problem to some Senators Oh.
By Maryam Wokili