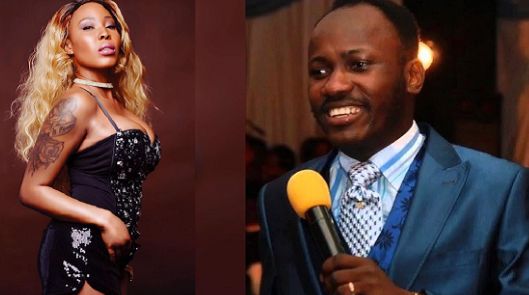 This is really getting interesting. The latest gist is from Festus Keyamo, a well-known human rights lawyer, let me state that there was an earlier report quoting the lady, Stephnie Otobo, that Apostle Suleman is "innocent" and that people just wanted to use her name to collect money from him.

But the report was from a source loyal to Apostle Suleman's church and now it is being alleged that with the connivance of the police, Stephnie has been rendered incommunicado.

What is really going on? The updates...

According to Linda, Lawyer Festus Keyamo told her that his client, Stephanie Otobo, Apostle Suleman’s alleged lover, has been rendered incommunicado, after the news broke of her alleged affair with him. Keyamo said Suleman is a "liar" for saying Stephanie was a stripper and that he sent her money just to help her stop prostitution.He claimed Stephanie was given something to drink to terminate her pregnancy. Keyamo said she has been taken to an unknown destination and might be forced to retract her statement.“As I speak with you, this morning they have gotten so angry that the media carried the story. They have kept her incommunicado. They drove my lawyers from her this morning. They have taken her to an unknown destination. We just hope they don’t kill her just to protect the so called man of God."There are so many women who have been abused by this so called men of God. They are paying the media here and there just to bury the story. As I speak with you now, my lawyers cannot get access to her. I am in Abuja right now. They have kept her incommunicado and we shall issue a statement to this effect soon,” Keyamo said.


Speaking further, Keyamo said she is at Alagbon with the police. Asked if she can provide a test result showing she was indeed pregnant, he said “She lost the pregnancy. They gave her a substance to drink and she bled everything out. Google her. She is a big lady in Canada. She is a singer and an artiste. She is not an easy person. All these attempts to paint her as a prostitute is a lie. She has a stage name. This girl is a well known girl in Canada...

"She has a budding career who is trying to make something of herself before this man of God tried to mess her up now. Whatever it is, we will release a statement. She is ready for this battle and we are ready as well. I think they want to force her to retract her statement and force her to say something else and that is why they have kept her incommunicado.”

Asked to react to insinuations that the allegations might be a ploy from some people who are not happy with Suleman for speaking out against herdsmen, Keyamo said;