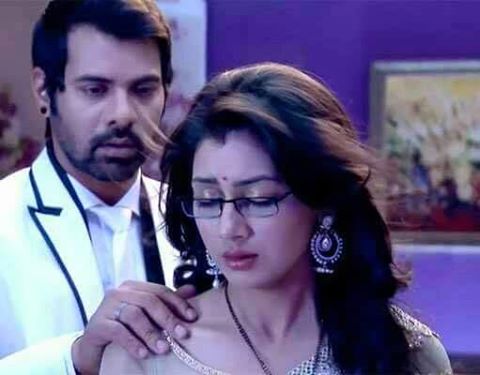 The epsidoe starts with Neil’s goon telling him about police forcing heading towards their den. Abhi laughs and asks Neil to surrender to lessenhis punishment. Neil asks him to stop laughing and says he is in a hurry, else he would have killed him right now, says he will hide him where police cannot reach.Aaliya and Tanu start fighting blaming each other for the mishap. Aaliya says Abhi has reached Neil’s den and he will force him to tell who is involved in kidnapping. Tanu says if she had told her before, she would have stopped Abhi from going and planned something else instead of valentine celebration. They continue blaming game. Mitali thinks let them fight for sometime.

Bulbul hugs Purab and gets worried for Abhi andPragya. Purab says commissioner told peopleheard bullet sounds in a seculded factory and wll be going there soon. She asks if Pragya and jiju will be back. He says they will and consoles her.Abhi and Pragya start fighting in front of kidnappers. Abhi says he got trapped because ofher and says she resembles one of goons. She says she was in peace without him, etc.Abhi’s daadi asks Janaki not to let Suresh in again. She says he came suddenly and she could not stop. Sarla says she is more worried about Pragya now. Abhi’s daadi calls her and worries about Pragya. Sarla asks her to take her soup and medicines on time as Pragya would not like her in distress. They both continue their concern for Pragya.

Abhi and Pragya continue fighting. Abhi asks goons to either kill him or free him as he does not want to stay with Fuggi. She asks him to stop calling her Fuggi. Goon asks them to stop their drama as he knows they want to free them to elope.Tanu and Aaliya continue their argument. Aaliya says she will call Neil, calls him and asks why Abhi picked his phone. He says Abhi was holding gun on him. She asks if he told Abhi about their involvement. He says he is not a small goon, he controlled the situation. She askshim not to harm Abhi. He says he will leave Abhi,but will not spare Pragya. She says he can do whatever he wants, but not harm her brother. Bulbul hears hear discussion and thinks whom she wants to save, something is fishy.Purab reaches Neil’s den with police. Goons hidebehind boxes. Neil elopes. Purab calls Abhi and feels Abhi and Pragya are somewhere around. He finds a goon behind boxes and asks where is Abhi and Pragya. He says he does not know what he is talking about. Inspector comes and says he torture him if he does not reveal. Goon says he is caretaker of this factory and nobody came here. Inspector says Purab they cannot doubt any innocent person like this and asks goon to help him search area.
Neil’s goons tying Abhi and Pragya to a pole. They think with boss’s permission, they will kill them. Neil comes there and asks where are Abhi and Pragya. Goons say they have tied them to pole and if they don’t kill them, they will be in trouble. Neil asks them to burn the factory so that even their bodies are destroyed. Goon asks if he should burn now. Neilsays police will get alert and will come here, so they should burn in the morning.Commissioner tells Purab his team is searching whole area and he is thinking of announcing on news channels about Abhi’s kidnap and whoevergives info will be rewarded. Purab says goon may harm Abhi and Pragya if they do this. Commissioner says he is right and he wanted to take his opinion.Daadi comes to Aaliya’s room worried about Abhi. Aaliya says Abhi is fine. Tanu tells Daadi that Abhi has gone to rescue Pragya after he got kidnapper’s call and blames Bulbul for not stopping him.

Daadi gets panic attack. Bulbul tries to explain, but daadi ignores her and goes to her room with help of Aaliya.Abhi and Pragya’s argument continues in kidnapper’s den. He asks her to hold breath and try to push rope down. She tries and says if they continue holding breath like this, there is no needof goons to kill them.Bulbul asks Tanu why did she tell lie to Daadi. Tanu says she told truth and Abhi is stuck because of her. She says she wants Abhi to come back and Pragya never come back, if anything happens to Abhi, she will not spare her, says after her secret is out, everyone will hate her including Purab. Bulbul gets tensed. Abhi and Pragya free rope from their chest by inspiring and holding breath. Pragya praises his idea and asks what to do next. He jokes to swell her face. She does. He jokes that she is looking fuggi now. She asks him to stop joking. Their argument continues. He says they have to wait till tomorrow morning till goons come. update rest para here Bulbul cries reminiscing Tanu’s words.

Purab comes and asks what happened. She hugs him and says she is unlucky for Pragya as all her problems are because of her, goons came to kidnap her but kidnap Pragya instead. Purab asks her to relax. She says everyone will hate her now including him. He says nobody will hate her and he will make sure nobody hates her, he loves her so much and will continue loving till hiseyes are open. She stops him. He says until he isthere, he will not let anything happen to Pragya and Abhi.Abhi tells Pragya to sleep till goons come in the morning. She asks why. He says his hands are tied, that does not mean he cannot punch her and asks her to sleep.Purab reminisces Bulbul’s words and thinks whois this kidnapper, if he is Abhi’s enemy or Bulbul’s lover, thinks if it is Suresh, then reminisces taking kidnapper’s call and hearing his voice, thinks it must be Suresh for sure.Pragya asks Abhi if he really came to rescue her.He jokes that he came to play antakshari with kidnappers and asks her to sleep. She says she is not getting sleep. He says she is more dangerous than kidnappers and asks her to sleep. He falls asleep, while she is still awake.
By Maryam Wokili