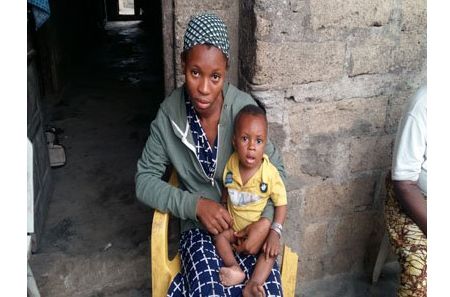 This is quite sad! For 6 hours, 19-year-old Rilwanu Akintunde was beaten up, handcuffed and locked inside a teargassed room for allegedly stealing N90,000.

The teenager's torturers were his mother, Mrs. Akintunde, her brother Kayode and a policeman identified as Titus.

Rilwanu, alias Rado, denied collecting the money said to belong to his mother, a hawker. But his attackers didn’t believe him. Unable to bear the torture, the teenager passed out and was rushed to Beachland Hospital, Arepo, where he was confirmed dead on Sunday evening.

His torturers secretly buried him at his mother’s site at Sotel, not knowing their action would draw the wrath of residents of Oriola Street, Ibafo and environs.

Youths in the area went berserk after discovering that the money for which Rilwanu was tortured to death was later found in his mother’s closet.

Wielding cutlasses, bottles, sticks and fire, the mob, it was gathered, stormed Kayode’s residence; chased the tenants away and vandalised his property.

Inscriptions, such as “Rado was a good son born by a stupid mother” were seen on walls of the building, with roofs, doors and windows destroyed.

When The Nation visited the community, residents were clamouring for justice to the culprits.

It was gathered Kayode and his police friend, Titus, had fled the neighbourhood. The deceased’s mother and Kayode’s wife were arrested by policemen from Ibafo Division, who visited the place.

According to residents, Rilwanu’s killers might have had another motive for their action because the teenager was neither a thief nor troublesome.

His friends, it was gathered, produced an obituary for him, which they pasted not far from the community mosque.

The deceased’s wife, Damilola Owoigbe, with their eight-month-old son on her arms, demanded justice.

She said: “I want those responsible for my husband’s death to be arrested and jailed for life. They killed him for nothing. Rado was never a thief. Everyone in Ibafo loved him. He was a peaceful person. He was an apprentice at a tailoring shop because he wanted to make life better for us and for his two siblings.

“Their father is dead. Their mother sells bottled water in traffic. She was the one who went and told her brother on Sunday morning that Rilwanu stole her N90,000. Then, her brother, Kayode sent his wife to call his police friend, Titus and they tortured him to death.

“I was not there. I was in my mother’s house. But I was told that the policeman brought handcuffs and teargas, which they used on him. I was also told that blood was all over his body. Now, I am confused because I don’t know who would take care of our son.”

A source, who craved anonymity, told The Nation the policeman worked at Area G Command in the Ogba area of Lagos.

Police spokesman, Ogun State Command Abimbola Oyeyemi, confirmed the incident, but said he was unaware if Titus was a policeman.

He said: “The information I got is that the woman, the boy’s stepfather and his friend tortured him to death. They said the woman complained that her N90,000 was missing and she accused her son.

Then, she told the boy’s stepfather, who sent his wife to contact a friend of his. They all tortured the boy to death and secretly buried him. The woman later saw the money.

“At the moment, the two men involved are on the run, but the women have been arrested. They have been transferred to the homicide section of the State Criminal Investigation and Intelligence Department (SCIID). The Police Commissioner Ahmed Iliyasu has ordered that the fleeing suspects be arrested.

“I am not aware that one of them is a policeman. But be assured that they will be fished out and dealt with in accordance with the law.”
By Maryam Wokili