Husband Caught Wife Having S3x With Boyfriend, Chops Off The Guy's Hand 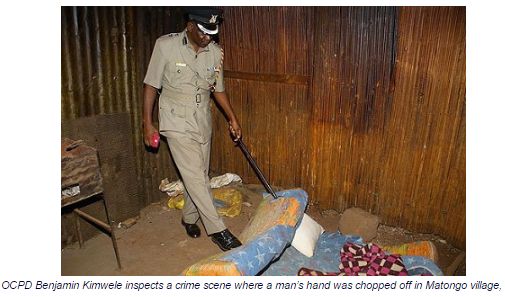 A guy known for his habitual antics with married women has landed in serious trouble after he was caught in a compromising position with another man's wife.The woman's husband left him in serious pain after he used a machete to cut off his left hand. The guy is now nursing a mutilated hand and multiple stab wounds after the incident.According to Nairobi News, Richard Omoke was caught in a hotel kitchen with the wife of 35 year-old Mr Vincent Gwaro on Thursday night in Matongo area.It was said that Mr. Vincent was at a night vigil of a funeral when word reached him around 9pm that his wife had been seen in the vicinity of the hotel. Angry and feeling betrayed, he got to the building and unfortunately found his wife Daisy with Richard Omoke on a mattress that had been laid on the floor.

He attacked the man with a machete and chopped off his left hand, while his wife escaped.

Police officer, Benjamin Kimwele said same guy had in March last year also suffered injuries after being suspected of having an affair with a married woman. Interestingly, Mr Vincent is the owner of the building and Richard Omoke was once his tenant who ran a hotel in the same premise.

Richard and his wife are separated, and he started going after other people's wives ever since.

Police report said, “The victim (Richard) had four more injuries on his head, neck and back and is currently admitted at Tenwek Mission Hospital. His hand is being preserved at the Kisii Teaching and Referral Hospital.”
By Maryam Wokili