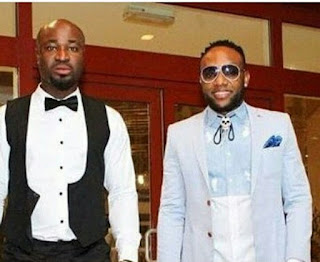 Singer Harrysong was yesterday arrested by Five Star Music over charges of fraud and breach of contract.
Read:

Our first encounter with Mr. Harry was sometime in 2008 when he approached our management for a music contract. As stated above, according to our findings at that time, his contract with ‘Question Mark Entertainment Record Label’ was still subsisting and valid.

Obviously we declined when we found out that Mr. Harry’s plans were ill orchestrated against his employers, by walking out on them without fulfilling the obligations clearly contained in his running contract with them.

When Harry’s employers (Question Mark Entertainment) got wind of his frantic efforts to desert his contract, a stern and official public statement was issued against Mr. Harry and a certain clause establishing his existing contract was clearly published for full consumption by the general public.

3a. The tussle continued between Harry and his employers till sometime in 2014 when Harry once again approached us, this time very desperate.
We opened preliminary discussions with him but demanded an official document from his former employers relieving him of any obligation or liability with regards to his contract with them.

3b. Our move to do things right and professionally with Mr. Harry earned us a Twenty Million Naira Legal Suit (N20,000,000.00) from Mr. Kevin Luciano of Question Mark Entertainment (Records are there for confirmation). We were joined as co-defendants with Mr. Harry.
Juxtaposing the above with what is going on now, it is quite unfortunate because “Good intentions counts as much as good actions, and the person seeking to do good is as good as someone who actually does it.

3c. Knowing the vulnerability of Mr. Harry on the impending legal suit, we solicited the help of certain well respected individuals in the Music industry to wade into the matter, one of which was our dear veteran Daddy Showkey.
By Maryam Wokili