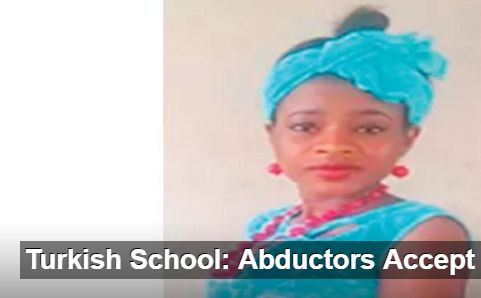 10 days after eight persons were kidnapped on the premises of Nigerian-Turkish Int'l Colleges, the police authorities became desperate on Monday, asking its operatives to waste no more time in rescuing the abductees.To this end, the Inspector-General of Police, Idris Ibrahim, deployed helicopters to patrol creeks around Lagos and Ogun states in a renewed effort to “smoke out the kidnappers” and ensure the release of the captives.It was gathered that the IG had also mandated a joint team of police formations involved in the operation to “immediately free the victims.”Gunmen invaded the NTIC premises on Friday, January 13, after digging a hole under the school fence. They shot indiscriminately and headed for the female hostel, where 3 pupils were seized.A Turkish teacher, a matron, a supervisor and two intending candidates of Unified Tertiary Matriculation Examination, who worked in the school, were also abducted by the assailants.The kidnappers had refused to let go of the victims on Saturday as expected by police following the arrest of masterminds of the kidnap,General Kakadu and Romeo Council aka Raw.A source told Punch that three helicopters from the Force headquarters in Abuja and the Rapid Response Squad of the Lagos State Police Command had been released for the operation.“The IG is worried that the victims have not been rescued. That was why he sent two helicopters to fast-track operations to free the victims. The RRS helicopter has also joined them and they have been hovering around Ogun and Lagos creeks as part of efforts to rescue the abductees safely.”

A security operative said the operation had reached “a very sensitive stage,” which required caution.

The official said, “The safety of these victims is paramount and non-negotiable. We know where the kidnappers are but we have to factor in our ultimate objective, which is to rescue. We understand the parents and relatives of the victims are worried. We are worried as well and the IG is desperate to get them freed.”

He said, “Our primary objective is to make sure that there is no loss of life. And with the helicopters that have been deployed for aerial patrols, we are very close to reaching our goal.
By Maryam Wokili