Revealed: Why Buhari Insists On Magu For EFCC 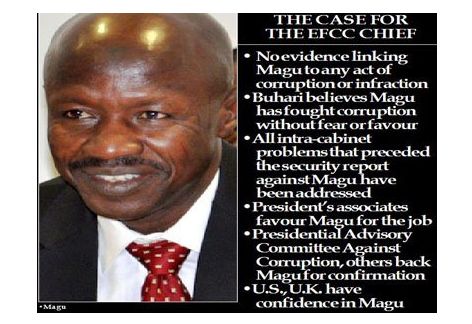 After weeks of intrigues, President Muhammadu Buhari has renominated Ibrahim Magu for the top job at the Economic and Financial Crimes Commission (EFCC).


It was also learnt that the Presidency may raise a lobbying team to prevail on the Senate to allow Magu’s nomination sail through.
The lobbying will involve confidence building and allaying the fears of some senators who are afrid that Magu might target them in the ongoing anti-corruption war.

A letter has been sent to Senate President Bukola Saraki, The Nation has learnt.

It was gathered that the Attorney-General of the Federation, Mallam Abubakar Malami (SAN), met with the acting EFCC chairman on Friday. The “rough edges were smoothened and a better understanding struck,” it was learnt.
A source, who pleaded anonymity, said: “As a matter of fact, the President based his decision on the fact that there was no evidence linking the acting chairman of EFCC to any act of corruption or infractions.

“The President is convinced that Magu has tried his best to fight corruption in a selfless manner and without fear or favour.

“All intra-cabinet challenges which led to the initial security report on Magu were addressed by the President before he left for London.”

Buhari, it was learnt, made up his mind to reappoint Magu after a personal interaction with the Acting EFCC chairman about one and half weeks ago after reading AGF Malami’s report.

Besides, said another source, some members of the kitchen cabinet and associates of the President insisted on Magu because his performance so far is one of the best in Nigeria.
By Maryam Wokili