Lady Almost Rap3d In Her Room, Stabs The R*past (See) Over the weekend, a young lady was almost rapped in her apartment, but the suspect did not succeed because she was so brave and fought him off.

The lady, identified as Lizha Lee Mbuto, took to her page to share this shocking story:

“So the Lord helped me today…Almost got rapped at myplace..So i managed to fight and stab the bastard??…The Lord I trust”.

She was taken to Frere Hospital Casualty in Ghana for treatment where she said she was feeling broken. Her apartment was torn apart during the fight and blood was split all over the floor. 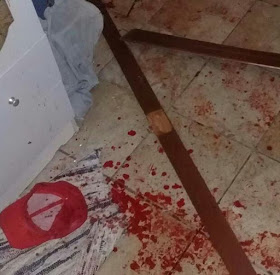 The suspect broke into her apartment through the front door. Lizha was able to fight him off with the help of her neighbor. Her neighbor heard the noise coming from Lee’s apartment and she intervened immediately. The neighbor was also injured.

The suspect was taken to the hospital for treatment. He got arrested in the hospital. He was found bleeding helplessly from the stabbings he got.
By Maryam Wokili