Husband And Wife Arrested Over N3.2m Fraud In Lagos (Photo) 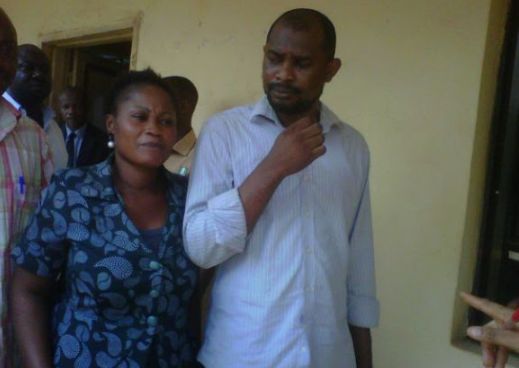 A 45-year old man, Austine Omuha and his wife Titilayo have been arrested and charged before a Lagos court for allegedly engaging in a N3.2million fraud.The couple were arraigned before a Magistrate’s court sitting in Ejigbo from where they were ordered to be remanded in prison.


The police alleged the couple conspired and defrauded one Omonkodion Lucky to the said amount under the false pretence of buying him an air traveling ticket to United States. The incident happened somewhere at Agege Motor Road in Lagos.

However, after paying the couple the money, they did not buy the ticket as they promised neither did they refunded the money as demanded by the victim.

The matter was reported to the police and the husband and wife were arrested and taken to the police at Shasha division. At the station they pleaded and promised to refund the money in bits.

The couple issued a Sterling Bank cheque with number 685519 and when it was presented to the bank, it bounced as it was discovered there was no money in the account.

They were immediately charged to court. Funny enough, the couple pleaded not guilty.

The presiding Magistrate, Mr A.A. Fashola granted them bail in the sum of N500,000 with two sureties in like sum.

They were remanded in prison  pending when they will perfect their bail.

Unfortunately, while they were being taken to prison, the husband and wife lamented that there was no one to take care of their three children at home.
By Maryam Wokili