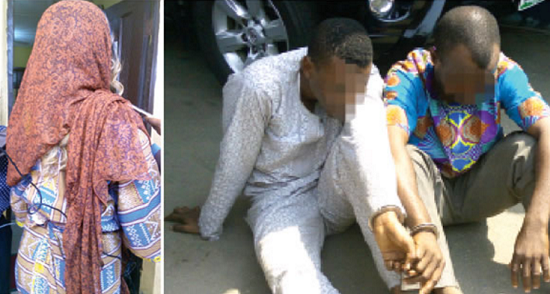 I am happy God has not made me a judge. Glad my way is far from that, because some people will never see day light again. It will take the Holy Spirit to convince me probably after 30 years in prison that they are now a new creature.

Little Esther (not real name) must be wondering why life has been so cruel to her. Although, she is only six years old, she has experienced things no child of her age should ever be subjected to.

It all started when Esther, a pupil of a private primary school in Amuwo Odofin area of Lagos State, was playing with her brother recently.

To the shock of the brother, she suddenly started kissing his manhood. After much probing; she accused her teachers of defiling her.
The minor confessed that one of her teachers had taught her about s3x during after-school tutoring and that the practice had been going on for months.

However, after the case was reported to the police, further investigation revealed that the girl had been s3xually abused by two teachers.

“She has not been eating well and has been crying every time; my baby has suffered trauma,” the mother said.

Recalling the incident, the mother said, “I noticed my daughter was kissing his brother’s manhood.
When I asked her where she learnt that from, she started shivering and claimed that it was nothing.

“I took her inside like a mother would do, then she opened up that it was actually what she viewed on her teacher’s laptop.

“So, I asked her for more details. She said when the lesson was over; the teacher would play p*rnographic videos for her to watch.

“And after that, he would start caressing her until he penetrates her with his manhood and fingers.

“From what she said, it happened about four or five times.

“We reported the case to the police and investigation showed that she was defiled.

The ‘X’ Squad of the Zone 2 Police Command, Lagos,on Thursday paraded Stanley Akanno and Olakunle Hassan, the two teachers identified by the girl as her abusers.

But both of them denied the allegations.

According to the police, it had been medically established that she had been deflowered.

Akanno said, “I am a parent as well. If I were to be the parent of the child, I would have started my investigation at home.

“According to the girl’s mother, the girl kissed the elder brother’s manhood and that was how she came to know about it.

“If she kissed the elder brother’s manhood, once, twice and thrice, it means this is what they have been doing. Unfortunately, they were caught on that day. She should have started her investigation at home.”

Hassan, who also denied the allegations, said, “I was told she claimed that she walked up to me and whispered in my ear telling me that she wanted to suck my manhood and that I took her to a corner and asked her where she leant it from and that I just pulled my trousers down and she started sucking.

“I have a laptop which was seized on Friday and they could not find anything like that (pornography) in it. I don’t know where this is coming from but I know that God will vindicate me.”