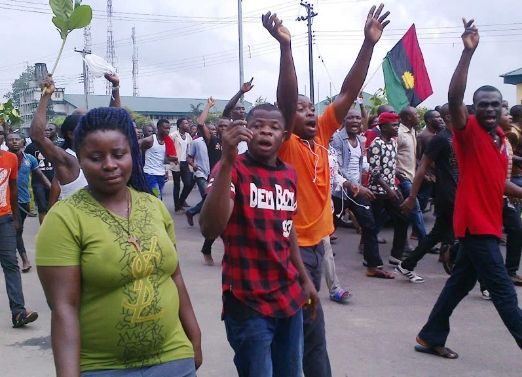 
The protesters say they were marching in honour of American President Donald John Trump.

The rally was by members of Nnamdi Kanu-led Indigenous People of Biafra and Ralph Uwazurike-led Movement for Actualization of the Sovereign States of Biafra (MASSOB).

The protesters were charged for conspiracy and treasonable felony.

The charges were not read out to them, neither were they allowed to take plea. The presiding chief magistrate of court five, Samuel Andrew-Jaja, did not also allow the team of defence lawyers led by Ifeanyi Ejiofor to make oral application for their bail. He ordered parties to come up with written addresses within seven days to address the court on the issue of bail and jurisdiction which was mentioned by the defence counsel.

Andrew-jaja reminded the parties that the two charges preferred against the suspects does not carry death penalty. He noted that the offence of conspiracy bears seven years punishment, while treason is life imprisonment upon conviction.

The prosecution, Inspector Romeo Queensoap from Force Headquarter Abuja, accused the suspects of plotting to ovethrow the government.

The second magistrate court where eight were arraigned admitted oral bail application but adjourned for ruling.

Queensoap also objected to the bail of the suspects. The courts adjourned till January 30, for adoption of written addresses and ruling on oral bail application.

Speaking to reporters shortly after the proceeding, Ejiofor absolved the suspects of any violence during the Trump “peaceful solidarity match”, but regretted that the police could open fire on unarmed people.

He claimed 15 of the bodies are presently deposited in different morgues, but he did not mention the name or state the morgues are located.
By Maryam Wokili