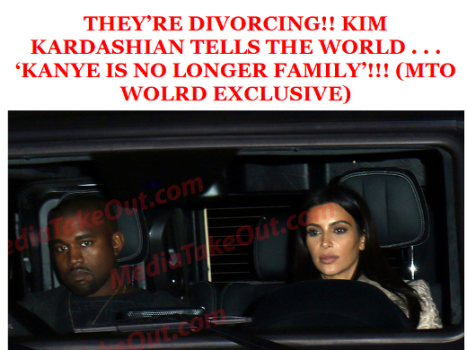 Kim K West and Kanye West are divorcing according to MediaTakeOut.com


MediaTakeOut.com exclusive reports that Kim and Kanye were divorcing few weeks back and now it's happening.

People were wondering how long it would be before Kim and Kanye got divorced, well you're not going to have to wait long for answers. MTO broke the news a few weeks ago, that Kim was spotted inside the office of popular divorce attorney Laura Wasser.

And this weekend - it's UNDENIABLE that Kim and Kanye are headed for a SEPARATION. Here's what we know, according to the NY POST, Kanye did NOT spend Thanksgiving with Kim, her family, OR HIS DAUGHTER. Yeezy ran off to Paris:

Kanye West skipped a family Thanksgiving with the Kardashians.
The rapper — without Kim and baby North — was spotted dining at Ralph Lauren’s restaurant in Paris with two male friends Thursday.
Meanwhile, Kim was in LA with the whole Kardashian Klan at Khloé’s house.

What man doesn't spend THANKSGIVING with his family, huh???? All you folks that DOUBTED our reporting, can you please ANSWER THAT.

But it gets even worse, it's clear that Kim is DONE WITH KANYE'S N*TCH AZZ. She tweeted out on Thursday night, "I’m so thankful to have spent the day with my whole family . . . Khloé cooked so much yummy food!." Since Kanye did NOT spend the day with her, that means she no longer considers him family.

What was the straw that broke the camels' back? Well MediaTakeout.com's insider tells us that Kanye was "upset" about Kim K's latest trip to Dubai. He suspects that there could have been FUNNY BUSINESS involved during the trip. 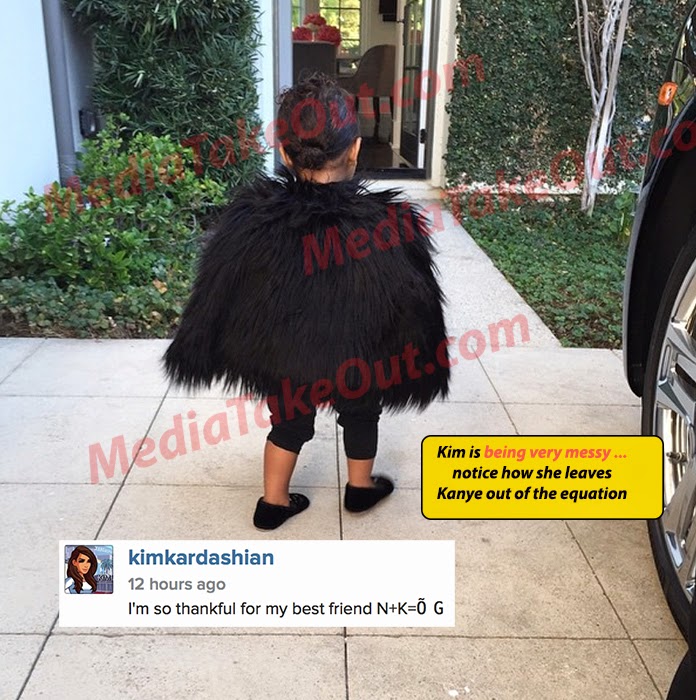 Kim Kardashian has been DROPPING MAJOR HINTS that her relationship with Kanye is ON THE ROCKS. Her latest . . . talking about how her DAUGHTER is her best friend . . . and leaving Kanye OUT THE PICTURE!!