Controversial male barbie, Idris Okuneye popularly known as Bobrisky has reacted after Speed Darlington dragged Tunde Ednut on socal media with threats to have him deported for claiming he made him popular.
Recall that we reported earlier about an ongoing social media war between Instagram blogger, Tunde Ednut and American Based Nigerian Entertainer, Speed Darlington.
The drama started after Tunde Ednut took to his Instagram page to claim that he made Darlington the star that he is today. According to Ednut, no one would have known Darlington if not for his constant push on social media.

Speed Darlington, in his reaction to that ‘bogus claim’, fired back at him and also threatened to tie Tunde Ednut’s future and get him deported.

Watch the clips here: Speed Darlington slams Tunde Ednut, Threatens to have him deported for claiming he made him popular (Video)
Reacting to the social media saga, Bobrisky who is not on good terms with Tunde Ednut criticized him. See his post below; 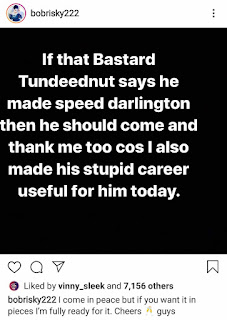