A randy couple who couldn’t wait to get home were filmed ‘having s3x’ on the top deck of a bus.
The pair were seen at the back of the 135 bus having ‘sex’ as they travelled through Prestwich, Greater Manchester, on Tuesday afternoon December 17th.
Gas engineer, John Dolan who sat in his van waiting for his friend, noticed ‘movement’ in the bus which was heading in the direction of a local secondary school, before he quickly filmed the s3x act and sent it to his wife. 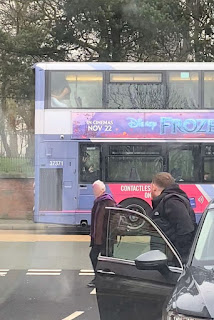 The post has gone viral online and has attracted more than 460,000 views with social media users blasting the pair.
John Paul Dolan, from Manchester, said: “It was mad – very strange. It’s just wrong.
“It looked quite vigorous. They slowed down a bit when the bus stopped but were still at it, then carried on again as it pulled off.
“I can’t imagine if an old lady got on the bus and saw them. She’d probably have a heart attack. 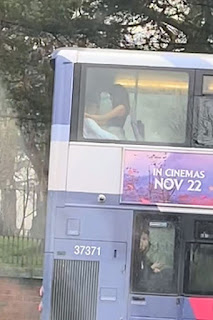 “I just hope they’re a couple and not doing it on the sly because now they’ve gone viral.”
As he sent the video to his wife, she also commented on how ‘disgusting’ the lovers were.
John said: “There’s a sandwich shop round the corner and I was waiting in the van for my mates to come out.
"The bus pulled in at the bus stop and I looked up from my phone because I saw movement and thought ‘what’s going on there?’
“There was another woman crossing the road at the time with a smirk on her face. She must have seen it because she looked about embarrassed.
“It’s funny the bus driver didn’t spot them in his mirror or on CCTV.
“There’s kids on that road. There’s a high school about a minute down the road and it was heading in that direction.
“I sent the video my wife and she said ‘that’s disgusting’. Obviously I’m a lad and I find it funny.”
A Go North West spokesperson told Mirror Online: “We’re aware of the incident and we have informed the relevant authorities.”