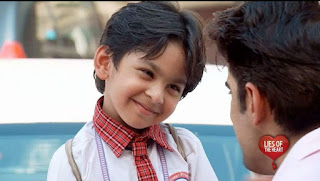 Urmi's brother Gaurav learns about the mms that Samrat had made of Anu and he boils with anger, but Ishaan manages to cool him down. Meanwhile, Samrat get furious as Urmi had given him a CD of Aditi's MMS and he begins to blame his mother for giving birth to girl. Sashi gets furious and shouts at Samrat and seeing this side of his mother, Samrat gets surprised.

Samrat later goes to his lawyer Niranjan and tells him about the CD and decides to produce this CD at court against Urmi. Later, that night Samrat gets shocked when Radha shows him the 'mangalsutra' (wedding chain)that she had purchased. Meanwhile, Ishaan and Urmi are taken aback when they learn that the date of the case has been preponed to the next day.

The next day during the court session Samrat's lawyer tries to prove in the court that Urmi is a characterless woman who had in turn made Aditi's MMS. He goes on to give the CD to the judge to see the MMS himself, but Samrat stops the judge from seeing the MMS. The judge scolds Samrat and starts to play the CD.   To the surprise of everybody present in the court, the CD turns out to be that of Bhajans and the judge warns Niranjan and Samrat and also asks them to pay a fine for wasting the court's time.

Samrat's mother,  Sashi gets the news and begins celebrating her son's defeat. She now seems to have lost all fear of her son and even asks her daughter-in-law to cook special food for her. Outside the court room Samrat tries to create a chao by insulting Urmi. But he ended up been insulted as Ishaan and Gaurav defended her from the clutches of Samrat.  Later, Urmi and Ishaan goes to a woman named Nidhi and ask her to trap Samrat and help them prove that he is a characterless man. At the same time, Niranjan asks Samrat to somehow convince Shaurya to speak against his mother in the court.

Samrat is tired of the life that he had been leading because of the case. Just then he sees a beautiful girl asking for a lift and he immediately gets restless. After thinking for a while, he finally gives a lift to the girl and even accompanies her to the club where she was headed to.

Nidhi on the other hand gets into play and fixes a camera in her purse and records the entire proceedings. Later, Samrat get a shock when he sees his lawyer, Niranjan in the club. Niranjan reminds Samrat that he should not be indulging with any girl until the case is closed. Samrat later drives Nidhi away and she gets upset as her plan to trap Samrat had failed. Later, Samrat takes an evil step as he tries to threaten his own son to speak against his mother in the court.