On Sunday, January 7, 2018, soldiers deployed to Arufu a boundary town between Taraba and Benue State disarmed and arrested 9 Civilian Joint Task Force CJTF with 5 AK 47 rifles. According to reports, initially a reinforcement of CJTF came to prevent the security operatives from transporting the arrested CJTF to Benue headquarters. The reinforcements later withdrew.
During the preliminary investigation the arrested CJTF claimed that the weapons were issued to them by some elements in Benue state as they reportedly said they are a legally constituted body by the Benue state government.
Interrogation of the suspected militia revealed that the gang had members of about 60 men camped in Gbeyi, Benue state.It was also gathered that over 1,000 of the gang team were stationed at different camps while 700 out of them bear arms.
The group said they were being trained by some ex-service men assembled all over Benue state.

They are currently in custody as investigation continues. 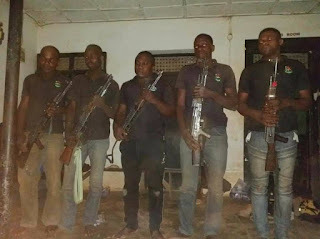