Home» Gist» News.» Olusegun Obasanjo Ask Buhari Not To Run For President In 2019

Olusegun Obasanjo Ask Buhari Not To Run For President In 2019 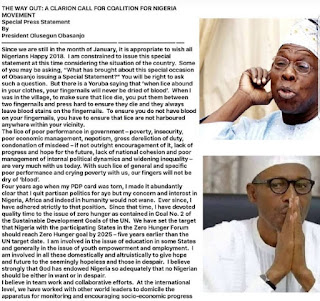 Former President Olusegun Obasanjo on Tuesday, in a blistering and excoriating 13-page statement has called on President Muhammadu Buhari not to seek re-election in 2019.Mr. Obasanjo, in a special press statement entitled, “The Way Out: A Clarion Call for Coalition for Nigeria Movement” said Mr Buhari has performed far below expectation and should honourably “dismount from the horse” to join the league of the country’s former leaders.Mr Obasanjo, a two-term president on the platform of People Democratic Party (PDP), said he feels disappointed by Mr Buhari, whom he supported during the 2015 election over then incumbent and candidate of his former party, Goodluck Jonathan.Likening the state of the nation to lice-invested clothes, he said the country’s fingernails is stained with blood as it tries to kill the lice by pressing them in-between two fingernails. According to him, in other to make sure that our fingernails remains blood-free we must do what it takes rid our clothes of lice.
While thanking Mr Buhari for the effort of his administration in rolling back the Boko Haram insurgency and his fight against corruption, Mr Obasanjo said Mr Buhari has ultimately failed in other areas where he had thought he would be efficient.The octogenarian, who bagged a PhD over the weekend, admitted he knew Mr Buhari was weak in handling the economy, he went ahead and voted for him because at the time “it was a matter of ‘any option but Jonathan’” and because he thought Mr Buhari would appoint qualified Nigerians to help out in that area.He also berated Mr Buhari for allowing the clashes between herdsmen and farmers to go “sour” and messy saying the endorsement of the President by some governors to seek re-election barely 24 hours after 73 people who were killed by herdsmen in Benue State were given mass burial was “a sad symptom of insensitivity and callousness.”Having ruled out PDP an APC as options, Mr Obasanjo therefore called for a movement he termed Coalition of Nigeria, which he offered to be a part of, to wrest power from the present ruling class and lead the country into the path of rebirth.