The Rivers state Government today embarked on total demolition and leveling of Don Waney’s mansion in Omoku, Rivers State. The notorious cult leader, kidnap kingpin and mass murderer was shot dead by security operatives recently in Enugu state
According to reports, the deceased, Don Waney masterminded the despicable New Year day mayhem in Omoku in which he led his notorious gang of criminals to murder 23 peace loving citizens of Omoku when they were returning from Cross Over Service at about 1:30am on Monday 1st January 2018. 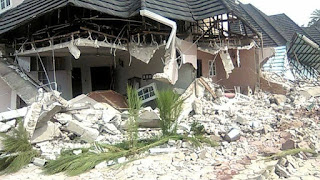