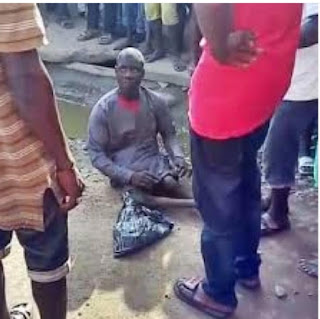 The officials of Lagos Police Command have arrested a disabled beggar operating in Egbeda area of Lagos.
The suspect, Godwin Fawehinmi was caught in possession of a gun and upon investigation, police recovered more guns from his house at Alhaji Sadiku street in Akowonjo area of Egbeda.

Fawehinmi who is yet to tell police what he was doing with the weapons, has been transferred to the Special Anti-Robbery Squad (SARS) office for further investigation.

The suspect, who is crippled, it was learnt, usually begs for alms on the street on a daily basis. However, it came to many as a surprise when a gun was recovered from him.

A source said some residents of the area where the man usually sits to beg for alms, noticed different people that visit him on a daily basis, look suspicious. That was why they informed the police.A police source said Fawehinmi might be keeping the gun for some armed robbers and pretended to be a beggar.

The state Police Public Relations Officer (PPRO), SP Chike Oti, confirmed Fawehinmi’s arrest. He said: “The operatives of the command went after him, conducted search in his house and premises and recovered different types of guns, axes, machetes and other weapons. Investigation is still on-going.”