Couple Filmed Having S3x In Front Of Sunbathers On A Beach 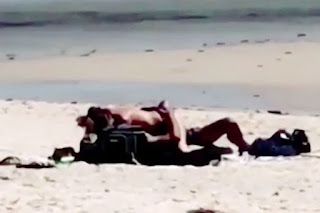 This is the shocking moment a randy couple were filmed getting very carried away in front of stunned sunbathers in broad daylight on an Australian beach.
Footage of the incident has been widely shared on social media of the randy pair having s3x on the sand at Henley Beach in Adelaide.
More than 100,000 people have viewed their antics in a now-deleted video posted on Instagram yesterday.
The woman, who was wearing a black bikini, is seen straddling the man on the beach, which is popular with tourists.
Before the post was removed, stunned viewers voiced their disbelief.
One wrote, the Mail Online reports: “At least get in the water and pretend you’re just having a “cuddle“.
Another posted: “Imagine the sand rash she has right now.”
It is not known when the footage was taken, and the couple have not been identified.