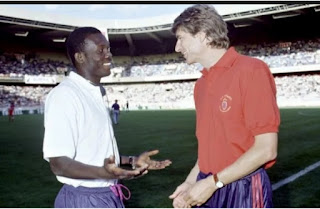 Arsenal football club manager Arsene Wenger has been duped by false reports that former football star George Weah has won Liberia’s presidential election, when in fact the final result have not yet been announced.
On Arsenal’s website Wenger says:
I would like to congratulate one of my former players, who became president of Liberia, George Weah.It is not often that you have a former player who becomes a president of a country and so well done Georgie and I would say just for him to keep his enthusiasm and his desire to learn and to win.”Arsene Wenger was Weah’s manager at Monaco in the 1990s.
Weah, a former Fifa World Footballer of the Year, ran for Liberia’s presidency in Tuesday’s election.
He failed in his two previous attempts to become president.
Story credit: BBC