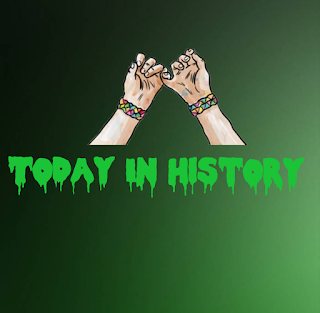 Today is Thursday, Oct. 19th, the 292nd day of 2017. There are 73 days left in the year.
Today’s Highlight in History:
Events:
1987, the stock market crashed as the Dow Jones Industrial Average plunged 508 points, or 22.6 percent in value (its biggest daily percentage loss), to close at 1,738.74 in what came to be known as “Black Monday.”
202 BC, at the Battle of Zama, Roman legions under Scipio Africanus defeat Hannibal Barca, leader of the army defending Carthage.
1216, John, King of England, died, just more than a year after affixing his royal seal to Magna Carta (“The Great Charter”).
1469, Ferdinand II of Aragon marries Isabella I of Castile, a marriage that paves the way to the unification of Aragon and Castile into a single country, Spain.
1781, British troops under Gen. Lord Cornwallis surrendered at Yorktown, Virginia, as the American Revolution neared its end.
1812, Napoleon Bonaparte begins his retreat from Moscow.
1914, the First Battle of Ypres began during World War I.
1936, H.R. Ekins of the New York World-Telegram beat out Dorothy Kilgallen of the New York Journal and Leo Kieran of The New York Times in a round-the-world race on commercial flights that lasted 18 1/2 days.
1950, the People’s Republic of China joins the Korean War by sending thousands of troops across the Yalu River to fight United Nations forces.
1953, the Ray Bradbury novel “Fahrenheit 451,” set in a dystopian future where books are banned and burned by the government, was first published by Ballantine Books.
1967, the U.S. space probe Mariner 5 flew past Venus.
1977, the supersonic Concorde made its first landing in New York City. The body of West German industrialist Hanns Martin Schleyer, who had been kidnapped by left-wing extremists, was found in Mulhouse, France.
1982, automaker John Z. DeLorean was arrested by federal agents in Los Angeles, accused of conspiring to sell $24 million of cocaine to salvage his business. (DeLorean was acquitted at trial on grounds of entrapment.)
1994, 22 people were killed as a terrorist bomb shattered a bus in the heart of Tel Aviv’s shopping district.
2003, Mother Teresa is beatified by Pope John Paul II.
Birthday:
Author John le Carre is 86.
Artist Peter Max is 80.
Actor Michael Gambon is 77.
Actor John Lithgow is 72.
Rock singer-musician Patrick Simmons (The Doobie Brothers) is 69.
Singer Jennifer Holliday is 57.
Boxer Evander Holyfield is 55.
Quotes Of The Day:
“It takes a clever man to turn cynic and a wise man to be clever enough not to.” — Fannie Hurst, American author (both this date in 1885, died 1968).