Couple Caught Having S3x In A Fire Engine (Photos)

A n*ked blonde was pictured having sex in a fire engine. Fire chiefs in Manchester are trying to discover the couple’s identity after the snap was posted by a man claiming to be a fireman seeking “fellow swingers”. It shows a n*ked blonde being pushed up against a fire tender’s side window as she romps in the cab.
Only her partner’s hand is visible as it snakes round to grope her left breast. 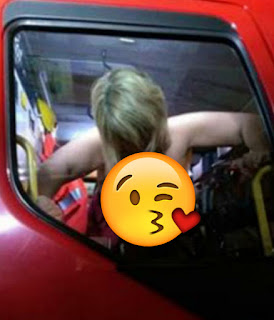 The snap was one of a series of explicit images posted on a swinger’s website in the profile of someone claiming to be a fireman.
In the photo a firefighters’ uniform and equipment can be seen behind the couple.
The website address of the Greater Manchester fire service is clearly visible on the engine’s door.
Fire chiefs are determined to track down the culprits — who face the sack for misuse of brigade equipment if they are firefighters.
According to The Sun, a source said: “There is real anger within the fire service that a colleague abused his position by having sex in an engine and used the image on a swingers’ site.
“From the image, we know at least two people were having sex and another was taking the photo, which means at least three people were probably in a Manchester fire station endorsing this indecent behaviour.
“It’s not a laughing matter and heads will roll. Images like this don’t help the service.”
Greater Manchester Fire Service confirmed an investigation is under way.