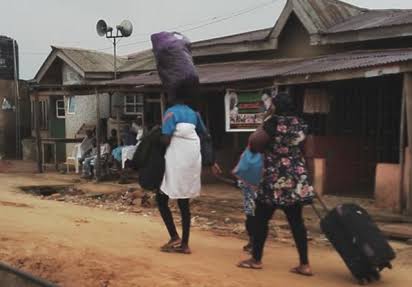 Scores of people who thronged the Oyo State police headquarters, Eleyele, Ibadan to catch a glimpse of four suspected ritualists could not hold back their tears as one of the suspects, Tunde Jimoh, gave a chilling description of how they tricked their victim, Akintoye Oyeyemi, into a deep forest and murdered him in cold blood.

Looking deceitfully innocent, the suspect, Tunde Jimoh said, “I am a business man who deals in cashew nuts. My brother’s friend came to him and said he would pay the sum of N10million for a business transaction.”

As written by Vanguard's Ola Ajayi

We felt guilty after killing him
“We felt guilty when we discovered this. But, we had no option. I then told my friend to let us take his body parts to that Alfa as earlier discussed. But, when we got to Alfa he was angry with us saying he had told us he didn’t have interest in helping us again. But, when we begged him, he told us to throw the head away and use alcohol to preserve the wrists, heart, legs. That was when the police arrested us.”

He further told newsmen how he got the gun with which he snuffed life out of their victim, saying; “We saw a Fulani herdsman herding his cattle. We were chatting with him and we negotiated to buy the gun he was carrying. He then agreed to sell it to us for N13,000 but removed the bullets in it. After then, he advised us to buy the bullets saying what is the use of a gun without bullets. I told him he should give us the bullets asking why we should buy gun and bullets separately. It was then he volunteered to give us the bullets.”

Another suspect, Mr. Abubakar Agboola, a 65 year old man, who one of the suspects said directed him to Alfa for money rituals denied it saying he never gave such an advice to him to go and kill a human being to get riches. The third suspect, Olatunji Ahmed, the Alfa who doubles as the herbalist also gave account of how they came to him initially but refused to cooperate with them when they brought human body parts.

The suspects, according to the Commissioner of Police, Mr Abiodun Odude, lured their victim, Akintoye Stephen Oyeyemi aged 33, to a forest under the pretext of doing business where they gunned him down. The CP Odude said, “The duo of Jimoh and Gbenga Babalade lured their victim, robbed him of the sum of N100,000 and gruesomely murdered him in cold blood.” “Having killed the victim, the suspects removed his body parts including the heart, head and wrists for ritual purpose. When the wife did not see her husband, she became apprehensive and raised alarm. She then reported the case at Atiba Police Station.

Odude continued; “During interrogation, two of the suspects, Tunde Jimoh and Gbenga Babalade who actually murdered the victim disclosed that they killed him because they believed he had in his possession the sum of N10million for the business as he was overhead saying during his conversation with one Olayinka Babalade another business partner two days earlier. They also revealed that after killing him, they decided to remove the vital organs for money rituals. They poured alcohol on the severed parts of his body to preserve it.”

The items found with them, according to the police, include one cut-to-size barrel gun, one long single barrel gun, two live cartridges, two expended live cartridges, an axe, three knives, deceased car key, hand bag, sandal and belt, one unregistered motorcycle, one empty bottle of Aromatic Schnapps- the content of which was used to preserve the severed body parts, N40,000 and criminal charms. Other items include severed heart of the deceased, two severed wrists and headless body of the victim.