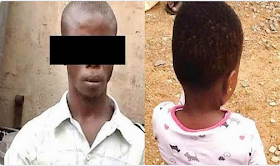 A 24-year-old man, Ishaiku Joseph, an internally displaced person from Gwoza Local Government Area, is now in police net for allegedly defiling two sisters, each four years old. The incident occurred last week near the Industrial Court opposite the University of Maiduguri.

It was gathered that the father of the girls helped the parents of the suspect with a room in his house which the suspect took advantage of and raped the girls who are of the same father but different mothers.

The suspect had raped the first minor several times when everyone in the house went out but he was caught with the second minor and the whole secret came out.The father of the girls who is a staff of UNIMAID and who reported the matter to the Police, said he wanted justice to prevail.Policeman who are familiar with the case said the suspect had confessed to the crime.