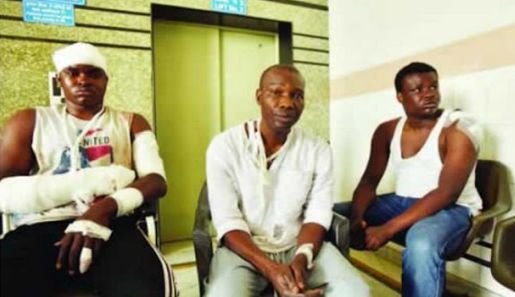 A Nigerian student at NOIDA International University, India, Precious Amalcima, who was among Africans attacked by Indians, shared his ordeal with Punch 's Toluwani Eniola. Excerpt:

Can you tell us your background?
I am a 23-year-old final year student of Political Science at NOIDA International University, India. I am from Edo State. My brother, Endurance, who was also attacked, is studying Economics in the same institution.

So, some Indian locals went to the homes of the accused to harass them, claiming they killed the Indian boy. The mother of the deceased was trying to take the case to court. The police released the Nigerians on Sunday (March 26). I think that enraged the Indians. On Monday, while the convocation was going on in our school, we (my brother and I) asked the police if we could go out. This was due to the tension then. The police gave us the green light to step out.

That evening, I was not feeling well. So I told my younger brother, Endurance, to get me some drugs. When he came back, we decided to go for shopping at a certain mall close to our hostel. While we were inside the mall, we got information that the locals were attacking blacks. We began to panic as we considered which route to follow to avoid the (rampaging) locals.

Why didn’t you hide inside the mall?
No one was trying to help. The Indians at the mall became hostile and asked us to go out. Suddenly, we saw Indians, who we think were more than 500, running towards us. They held sticks and other weapons. We entered another plaza and asked for help but nobody was interested in helping us to take cover. We hid somewhere for about 25 minutes but the crowd soon caught up with us. They dragged out my brother from where he was hiding and began to beat him. They also dragged me out from where I was hiding. They stabbed me on the shoulder with a knife as I cried for help. It was our cries that attracted other students, who called the police. The police came to our aid and rushed my brother and I to the hospital. The medical officers at the hospital refused to treat us. They were even laughing at us.

How come they refused to attend to you when it was the police who took you to the hospital?
It was not only us who were attacked; other blacks in the city were also attacked. So, the police had to leave us at the hospital to rescue others. So, I dragged my brother out of the hospital. Fortunately, we saw an Indian, who was a Good Samaritan. The Indian took us to another hospital where we eventually received medical assistance. The (Nigerian) embassy officials later came to commiserate with us. They took good care of us and even paid the hospital bills. So after three days, on Wednesday, we were discharged while the police escorted us home.

Was that the first time you would experience such an attack?
That was the first time of being attacked in India. But that was not the first time that blacks, especially Nigerians, have been attacked in the country. In fact, Indians attack blacks, especially Nigerians, every year. Although there are some good Indians in the country, others have been generally hostile to us. This year, they attacked blacks in other states. Last year, they killed many Africans. If you check the records, their attacks on Africans have become an annual ritual.

Why are they hostile to blacks and Nigerians?
I think Indians don’t really like blacks, especially Nigerians. They think Nigerians are drug peddlers. In the state we are studying, almost all Nigerians are students and we don’t deal in drugs as being claimed.

Why did you and your brother choose to study in India?
We developed an interest to study in India because of India’s interesting movies which we grew up watching and adore. We thought all Indians were nice people but our recent experiences shows that we were naïve.

Did you regret coming to India to study?
If I knew (Indians don’t like Nigerians) I would not have come to India. With this experience, I will not even advise any of my siblings to consider India again because of the insecurity and the undue treatment meted out to blacks. I definitely regret coming to India to study. While the mob pounced on us, I thought we were going to be killed. I did not even remember to pray. I was only crying and begging them while the attack lasted. If not for the police intervention, we would have been dead by now.

Do you think the Indian government and the police have a hand in the attacks?
The Indian government is capable of stopping the problem but I don’t think they are serious about it – as such attacks have been occurring over the years. They renew their promises of protecting Africans every year but they have not been able to live up to their promises.

What is the present situation in NOIDA?
We are living in fear. For now, we (students) have been advised to stay indoors since Monday. The embassy has been supplying welfare materials to us. Many good Indians also came to the hospital to apologise on behalf of the mob. Some Indians also donated welfare materials to us. If you don’t have food, you would request and they would get it for you; and water too. They have been helping us in that regard. Some Indian groups have also risen to the occasion, donating welfare materials. The Nigerian embassy has been very supportive. They asked for our bills and I am sure they will offset them. I went back to the hospital again today (Thursday) for further check up and to get eye drops. My dad asked us to come back home but the ambassador pleaded that he should allow us to stay, promising him that things would get better.

What do you want the Federal Government to do about now?
I don’t know exactly what to say because I am devastated. My brother has been resting since we were discharged from the hospital. The Federal Government should talk to the Indian Government to stop this kind of attack. If they don’t want us to study in their country, they should tell us. The Federal Government should withdraw their cooperation by sanctioning Indian companies in Nigeria. If they cannot guarantee our safety, I don’t see any reason why Indians should be making billions of naira in Nigeria while we are facing undue treatment in their country. So far, we are impressed by the intervention of officials of the Nigerian embassy, who warned the Indian authorities not to allow the attack to happen again. The Indian police have apologised too. The only problem is that we have been restricted to stay indoors. We hope that things will get better in days ahead.

What do you want the Indian police to do on this matter?
The Indian Government and the police authorities should not sweep this matter under the carpet. They should fish out the attackers and ensure that there is justice. Ensuring justice on this matter would serve as a deterrent to others. If they don’t arrest the culprits, more attacks would still happen. These attackers should be treated as scapegoats.