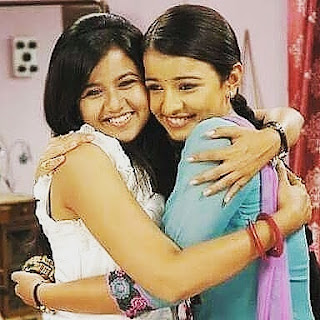 Seema telling Prabhu that even her father had washed his feet and has he forgotten. Seema then says does the tradition change over years. Shail says to leave the washing of the feet. She says they don’t have to follow it. Mandy agrees with Shail. Mausi then tells Shail that in a marriage the groom is considered to be Vishnu and the bride as Lakshmi. She then explains it to Akash too. She says don’t they also wash the idols then that’s why the groom’s feet is washed too. She says that’s what she has been taught. She tells Akash that don’t tell her he hasn’t heard of it and Akash says he has no problem doing it. Gunjan and Rachana get ready. Rachana says Gunjan is looking beautiful and Gunjan says that a lot of guys will become lovers looking at Rachana. Gunjan then asks the stylist where the sardar meaning Vihaan is and she says not to mention his name as she wouldn’t have let him go if not for his sick mother and blind sister. Gunjan and Rachana are amused hearing this and laughs. Dholu comes and tells Gunjan that the procession has arrived and Gunjan tells Dholu he looks handsome. Rachana says she will see what is happening and Dholu says that Akash is about to wash Mayank’s feet. Gunjan and Rachana are shocked. Gunjan says its nonsense and says its really sick and that how can Akash wash Mayank’s feet and that she is going out. Rachana says to promise that she won’t go out till Rachana tells her to.The water and the tray are brought. Seema tells Mayank to sit down. Shail looks upset. Akash bends and tells Mayank to remove his shoe when Mayank stops him and says that he should welcome Akash as he has already welcomed him into the family by agreeing to the wedding. Mayank says that the elders are like God to them and that he is Gunjan’s dad and also his dad. Mayank says with the changing times it is time to change the traditions too and says that he will wash Akash’s feet. Seema, Mausi and Sangeetha are shocked. Akash refuses but Mayank insists and Seema tells him not to. Mayank says that he will do it and that with time things change for the better. Mayank says that the traditions should be changed with time and that if the traditions didn’t change then Seema wouldn’t be standing with him today as traditions say that women are not allowed to be in the wedding procession. He also says that even Mausi shouldn’t be there. He says that traditions use to say that drinking water in a girl’s in laws house is a sin but that doesn’t happen anymore. Akash still refuses but agrees finally and Mayank washes his feet and Akash hugs Mayank. Shail is happy with Mayank and pats him. Sangeetha tells Seema that Shail looks so proud and happy and that she hasn’t heard that a son-in-law washing the father-in-law’s feet and that she feels that they (Shail, Dayal and Akash) are more from the groom’s side than them.Seema says they will see how they escape for long. Vihaan comes into the dressing room. The designer gets angry at him and says did he see the time and that he is late. He says he took a long time getting ready. She says why was the need for him to wear a suit as its not his relatives wedding. She tells him to wait and help them out as she needs to go to another wedding. Vihaan compliments Rachana and says she looks good in the clothes and says but. Rachana asks but what. Vihaan removes the clip from her hair and lets her hair loose. Rachana is smilling away. Shail comes and calls Gunjan and Rachana. She looks at Gunjan and smiles and says she looks beautiful. Gunjan looks upset and Shail asks why. Gunjan says did Mayank wash Akash’s feet and Shail says does she think Mayank will allow that. Shail says whatever Mayank did today she is very happy and says that Mayank welcomed Akash by washing his feet. Gunjan was happy and Shail says to come quick.Gunjan is walking to the wedding stage as the Kabira song plays. Mayank sees her and smiles and then tears up. Everyone look happy. Akash also tears up and so did Gunjan. Akash hugs Gunjan.Mayank comes and holds his hand out to Gunjan. She takes his hand and he whispers thanking her for coming into his life. Gunjan and Mayank takes the garlands. Mayank is about to garland Gunjan when her friends carry her and he is unable to reach. Gunjan’s friends tell Mayank what’s the rush and to agree to their conditions first. Mayank says he agrees to the conditions and to just order. Her friend says to always keep Gunjan happy and fulfil her dreams and Rachana and Chaya says to help her. Mayank says he agrees and that in short they mean for him to become a slave to her. Seema, Sangeetha and Mausi are angry.Mayank says he will become Joru ka Gulam but for now he just wants to marry Gunjan. Seema Sangeeta and maasi are furious. Mayank put s the maala on Gunjan but she does not and eats bhaav she tells that he convinced her father and entire family but he never proposed her. Mayank bends on his knee and asks gunjan to marru him and she agrees. Vihaan throws a flower on Rachna Bobby is upset and before Vihaan can react Rachna pleads him not to in actions. Seema is unhappy and the photographer asks her to smile as she is the boys mother Seema tells Sangeeta and Maasi that she is desperately waiting for the kanyaadaan to happen then she can make Shayl dance to her tunes.