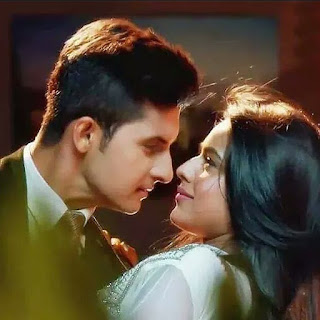 Siddharth hears him and thinks to make friendship with him. He comes to him and says he came to know that he is a good astrologer. Parimal says yes. Siddharth asks him to bless him and says his wife can leave him anytime. Parimal says Siddharth want to ruin their life. Siddharth calls him guru ji and says he have given him a high place in his life. Parimal asks him not to waste time. Siddharth says this Shishya came to meet him first time and brought dakshina for him. Parimal’s eyes pop out seeing the money. Siddharth keeps bundle of notes on the table and says he will take it back as he is inauspicious. Parimal says he should accept his talk, and asks him to bring kundli. Siddharth says okay and says he will bring Kundli. He gives the money. Parimal thinks Roshni is really lakshmi.Siddharth asking Roshni why she is angry at him. Roshni says she is not angry at him. Bansi looks on. Shakuntala looks at Raj’s photo and thinks she wants to do shringar for him. Bansi comes and whispers a plan into her daughter's ears to do some important work. Shakuntala agrees to do her work and she immediately gets to action. Bansi looks on. Siddharth tries talking to Roshni. While Roshni is expressing her disappointment towards Siddharth for not involving her in his plans and further tells Siddharth she wants to know what is going on about his plan. Siddharth says so much is happening and tells something which is muted. Shakuntala unwinds the screws of a window and the glass window comes crashing down.

Siddharth sees the falling window and manages to saves Roshni on time. Shakuntala smiles. Roshni asks Siddharth why did he save her and got himself injured. The family comes downstairs and Bansi claims that it is a sign of inauspiciousness thing as theirdaughter in-law is living with a stranger man. Roshni says he is not stranger, but her husband and that Bansi Maasi is inauspicious and not her husband.Bansi says she will protect herdaughter in-law and no one can come in between her way. Durgardevi asks Roshni to go to her room and asks Siddharth if he is fine. Siddharth says yes. Bansi looks on. Siddharth looks atBansi. He understands that BansiMaasi is responsible for the window falling down and thinks many guests have come in this house, and their target was his family, but nobody could harm his family as he was covering them like a protective sheild. He says he know who is doing all this and that he won’t let anything happen to his family.

Later in the morning, Naani comes and asks who made this breakfast? Siddharth says he made it for her. Naani sits to have food. Siddharth serves her. Naani says it might serve good. Siddharth asks her about the secret which is torturing them, and asks if she will hide it from him. Nasni nods no. Siddharth says he is always with her and promises to support them. Naani is about to say, but just then Durgardevi comes and stops Naani asking Siddharth not to trouble Naani. Siddharth says she ( Durgardevi ) have fought with thousands of troubles and asks how could Bansi Maasi and family made her helpless. He says Bansi have slapped him in front of her and she couldn’t do anything. He asks about her helplessness, and promises that no one can touch or harm her. He promises that he will set everything fine and gives Roshni’s promise.

Kritika calls Bunty. Bunty’s phone falls down. Shakuntala picks the call and asks who is she? Kritika says it is her husband’s phone. Roshni comes and takes the call. Parimal takes care of Guru Siddharth and goes to bring ganga jal.Siddharth mixes something and asks Parimal to mix the ingredients before consuming it. Parimal eats it. Siddharth asks what is worrying him? Siddharth steadily gains certain information regarding Bansi Maasi's association with Durgardevi when Parimal tells him their daughter in-law is not ready to come with them and they don’t know what to do as she doesn’t talk to them well. He says his mother's name is Bansi and she rules on everyone. When she forces anyone then a storm comes. He tells sage Siddharth that Durgardevi and Naani have betrayed them 18 years back and the secret is not yet open. When it opens then Durgardevi and Naani will go to jail. He further tells him that Durgardevi will have to forget her daughter once she knows her secret. Roshni will not want to see Durgardevi and Naani. Siddharth was shocked and determined to find out the secret.