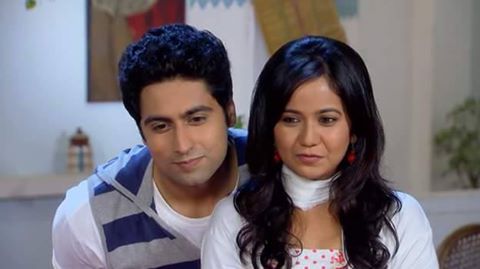 Mayank ends up paying 21000 to his saalis after a lot of insisting which leaves Seema angry. She feels it s a waste to pay so much for 350 rupees shoes. Maasi is angry and says she will not go home till Shayl apologizes Prabhu says that Shayl wont and Maasi threatens to leave home which Prabhu agrees. Dayal also says that what Shayl did was not wrong and she may be silent but is not deaf or blind and can see anything and tells Seema that her paap ka ghada is full. Prabhu is fine with Maasi leaving and Dholu says there are few autos outside and he will stop one. maasi and Prema are leaving when Prabhu tells her to send a sms when she reaches as it s free.Before leaving Maasi gives advise to Seema to always treat Gunjan like a DIL not daughter and to love Mayank a lot as she needs to control her son. Akash tells Gunjan not to cry and the bidaai rituals start . Gunjan imagines Sneha to be a part of it.Dholu is upset with Rachna that she made a fool out of him. Rachna says she will give him chocolate he says he wants 3 and then Rachna agrees Dholu is happy. There is someone at the door and a man comes and tells her to be present at akbar s darbar (promotion of Jodhaa Akbar) maharani Jodha Bai has given Gunjan blessings and a giftPrabhu scolds Seema as she has not started the grah pravesh preparations. Seema is holding the kalash when Mandy bups into her and asks if it has rice or glsas pieces as she might start torturing Gunjan from Day 1.Seema is irritated. The family comes back and Seema does arti to welcome Gunjan and Mayank. Gunjan then touches the kalsh with her foot and walks after placing her feet in alta ki thaali.Mayank asks Gunjan how her new house is she answers its good but she cant say the same about her husband he asks her to wait till the night. Gunjan says she is hungry and Shayl asks Mayank if he is also hungry Gunjan is touched that Mayank fasted for her. Rachna tricks Mayank that his friend called on the landline and Mayank leaves Rachna tells Gunjan about a rasam where she has to run around a person thrice and then take blessings . Gunjan does it around Seema and everyone is laughing Shayl realizes Rachna tricked Gunjan and says it loud.Shayl tellls Gunjan that she will get fruits for them but Seema insists Gunjan has to go to the temple do arti and only then break her fast . Shayl is furious but Mayank says he will wait as he has fasted leaving Seema shocked. Bua tells Seema to stop it and to take blessings at home and they can eat as she made food without onion and garlic. Everyone is eating while Rachna and Shayl are serving. Mayank Gunjan feed each other and Seema Sangeeta exchange glances. The game starts where Mayank and Gunjan have to search for ring in a bowl filled with milk and rose petals . Who ever wins the game will dominate the other. Mayanj wins the first and Gunjan wins the second. In the last round Mayank finds the ring but snatches it before he can take it out . Seema feels even if Gunjan would have lost she would be dominating her son.Shayl tells the girls to take Gunjan to her room. Seema asks Gunjan to get up earl as its muh dikhai but mandy says that its not possible everyone laughs . Mayank enters the room and sees gunjan on the bed in ghungat he goes near and she is hesitant and Mayank tells not to bore him he sees her hand and it has no rings / mehendi he opens the ghungat and its Chaya. All the girls come in and Rachna says they were teasing him Mayank tells them to go and asks where is Gunajn Rachna says sleeping under the bed. He puts her to sleep on the bed kisses her head holds her hand close to his heart and goes to sleep admiring her, Maynk is talking to himself that he waited for so long for this day that Gunjan will be sleeping peacefully next to him.

Next morning all the guests have arrived but Mayank and Gunjan are sleeping.Sangeeta knocks on the door but no one gets up. The guests keep asking where the bahu is and Seema is getting anxious.Shayl talks to Rachna who says she will wake them up. Rachna keeps knocking on their door and screaming . Mayank wakes up and realizes it s 11. Rachna wakes Gunjan who asks her why is she ready so early for college and she wont go today. Rachna tells you were married yesterday you remember that na. Gunjan is shocked its 11 and asks Rachna why she dint wake her yet. Rachna says the whole house is trying to wake her up.Mayank tells her to chill but Gunjan says how can she her day does not start without her cup of coffee. Mayank says he will make for her and goes to the kitchen where Sangeeta sees him and teases him that the night might have been really long and that s why he could not get up. She offers to make the coffee but Mayank says it s for Gunjan and then corrects it that its just one cup and he will make it. Sangeeta goes to Seema and laughs that Mayank who never took a glass of water from the kitchen (I remember him filling jugs before ) is making coffee for his wife. Gunjan realizes that her washroom kit is in Rachna s room. Gunjan hides and goes to Rachna s room only Dholu sees her . Gunjan enters Rachna s room and asks her to get her toothbrush. Mayank comes back and finds Gunjan missing Dholu tells him Gunajn was running and his=dink as if she was playing hide and seek.Seema enters Rachna s room and tells her that she saw Gunjan running and that she should not come in front of guests like that and gives her a saree and jewellery. mayank comes in and gives Gunjan coffee and Seema is angry but she does not show instead taunts sweetly that from first day only he is doing gulaami. She says he never gave his mom one glass of water but coffee for his wife. Seema calls rachna and Gunjan tells Mayank that she does not know to wear sarees Mayank says he will help her. Mandy is eating and Sangeeta taunts her that usually people dont even drink water in their daughters sasural. Mandy gives it back saying Maasi even ate Halwa puri but had to go . Seema starts shouting on her but Prabhu comes and scolds Seema asks her to apologize Mandy says there is no need as his wife is not well and it happens during wedding times.Gunjan and Mayank are trying to fix her saree and finally Gunjan does it in the end and calls him useless. Mayank istickling her and says that she spoilt his last nights planning. They are playing around when mandy hears and tells them to control as voices can be heard outside. Gunjan realizes she has not put sindoor. Mayank says its old fashioned and there is no need when gunjan says everyone applies it.Gunjan comes out and cant walk in the saree and keeps making a fool of herself . Sangeeta put s the ghungat on her. The function starts and when a lady opens her ghungat she realizes there is no sindoor and says it aloud. Mayank is watching everything from a window. everyone is shocked