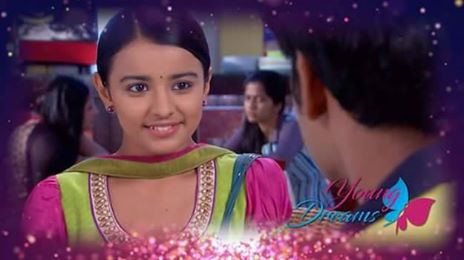 Rachna agrees and before she can close the door Shayl enters and Rachna cuts the call. Shayl tells her that for a few nights she will sleep with Rachna to give her company . Rachna is unhappy but has no choice.Shayl is making preparations in the kitchen to help Gunjan Seema slyly tells Shayl that its better if Gunjan does everything alone. Gunjanc comes in and agrees . She starts her preparations and she keeps making a mess Seema and Sangeeta see her preparations and are happy that they can scold her Mayank comes in and fans her and offers her cold drink as he cant do anything else.The kheer gets burnt and Rachna tells her to remove the good portion and add Kesar and elaichi.Rachna and Dholu announce the food is ready everyone is shocked to see a lavish spread . Gunjan says that she spent the whole night searching recipes on the internet and Prabhu praises her. Everyone eats while Gunjan Rachna and Dholu are serving everyone praises her food and Bua says that even Seema Sangeeta and Shayl could never prepare such tasty stuffed bhindi. Gunjan serves Kheer to Seema and she says its burnt even Sangeeta says that but prabhu says that there is so much good food only you can say such stuff. Prabhu says that Seema does not even know to make one good cup of tea. Prabhu gives her 15/10. Akash gives her cash saying shagun and on bua s questioning Prabhu gives Seema money and she has to give it to Gunjan as shagun.Gunjan apologizes for not wearing sindoor yesterday andsays her role model is her mom and she never wore sindoor not that she dint love her father and Mayank agrees that she should not wear sindoor.. Everyone is impressed and Seema is shocked. Prabhu supporting Gunjan for not using sindoor, Seema also supports but forcefully. Gunjan tells everyone that she will be following all other riwaaz and cultures properly. Mayank tells Gunjan that they will go for their honeymoon at Goa and for teasing her he behaves like he is going all alone for office work. Mayank asks her to wait as he will give her one more surprise. Door bell rings n Seema takes the courier on the door that contains a stripped top, Mayank n Gunjan smartly takes the dress. Dayal telling that he will be coming late due to work. Gunjan and Mayank having some fun at their room. Aakash gets ready to leave for australia, Gunjan acts emotionally. Aakaash after having a meet with all gives a cheque of Rs. 5 lakh, Seems acting snatching the cheque Gunjan sees her reaction. Aakaash hugs Gunjan, she cries and asks to see off her father at the airport but Aakaash asks her not to do that as it will make difficult for him to go away n then a final good bye. Gunjan goes to her room and cries Mayank following her and supports her. Tells her that he has booked the ticked for the same day as he was known with the fact that she will cry after Aakaash’s arrival.

Mayank and gunjans room where they are spending romantic time suddenly dholu comes in and says that they are going to goa without takinghim along.He remind gunjan when she promised of taking him to a honeymoon all laugh . seema enters the room with a glum face saying that they planned a trip to goa without even informing her . mayank tells her that everything got planned in such a rush.gunjan is trying to reach a bag and asks mayank for help. seema gets annoyed and leaves the room. Later seema pretends to be sick and hav a headache she tells sangheeta to go and call gunjan to disturb her packing. gunjan comes and says shes not going anywhere until a doctor comes and check her. seema says its not that serious and for them to go shail agrees and seema annoyed.Dayals friend comes telling him that they r friend since long time and to be sure to give the money for the items in the shop or the factory will b angry. dayal agrees and says that you have done me a big favor in return i have to do this much. he says he will give the money within 7 days. Dayal tells shail that he is going to a meeting and will be late so when the delivery comes to tell either prabhu ar gopal to bring it in the shop, he leaves. meanwhile its started to rain and storm outside and a call come ,rachna answers it informing them that the delivery for the shop has arrived. rachna tells them her dad is not home so she will call an inform him. she calls dayal during his meeting and tells him that delivery arrived and prabhu or gopal r not in the house. dayal is surprised that it arrived so fast.rachna asks him if she can go and attend them. dayal first says no but then he agreestelling her all the steps of what to do. shail tells rachna to go carefully as its raining hard.Rachna goes when the delivery is coming inside she recalls what dayal told her. after everything was done she leaves the shop.as she leaves she forgets what dayal told her about sturning off some switch. scene shifts to the shop where the switch which rachna forgot to off is flickering with small flames of fire.The phone rings at home and dayal picks up he suddenly becomes shocked and drops the phone unable to speak. shail then picks up and also is shocked she tells everyone that their has been a fire in our shop and everything ig gone she cries.Everyone is horrified. later, dayal, prabhu, gopal go to the shop where they see it burnt. dayal becomes depressed and faints seeing it.