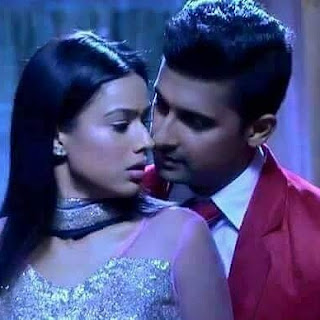 Roshni in a fit of anger as Bansi Maasi slapped her mother, tells her mother that she would not be quiet seeing all this and asks how dare the old woman raised her hand on her for no reason. Durgardevi tells Roshni as to whateverBansi Maasi saying is right and that Kunal is Roshni first husband. Naani tells her she was married at the age 5. Roshni says they are talking about child marriage. Siddharth tells them Roshni is his wife and nobody canclaim his wife to be theirs. Durgardevi says nothing is in her hand. Siddharth asks Roshni to pack her bag and leave with him. Naani tells Durgardevi that if Roshni and Siddharth don’t stop here then Bansi can’t speak out the truth which is hidden since years. She asks Durgardevi to stop her. Roshni and Siddharth are leaving the house while Durgardevi follows them and sits on the floor with folded hands. Naani also folds her hand. Siddharth asks them to tell what option is left for them and asks Naani to tell everyone the truth and asks what is this nonsense.Bansi Maasi tells Siddharth that she will tell him the truth. Durgardevi gets tensed. Bansi Maasi tells Durgar that she thought she will hide with their eye sight, and vow to get their Roshni anyhow and that she is ready to tells everyone the truth. She asks Roshni to come near her, and then tells Roshni the unrevealed truth that her Naani is her childhood friend and brought Roshni to her village and got her married to her grandson when she was 5 years old. Everyone was happy. She says her mother promised that they will keep her as their amanat and will do vidaai at the right time. The old woman further says they agreed, but her Naani and mother had changed and changed the city, house etc. And that she might be thinking why her mother did this. As the old woman goes on to reveal the story,  Naani intervenes and requests her not to tell anything further. Bansi Maasi says she have to tell the truth. Durgardevi stops her and says not now. Bansi tells Durgar that she thought that they will not find her and they found her whe she went to jail. Roshni and Siddharth are shocked and annoyed. Bansi holds Roshni’s hand and asks her to come with her.On the other hand, Raj stops Simranthat he will stay with her always. He brings flowers and asks her to give Siddharth and Roshni as they like it.Simran tells Kritika that their Roshni is coming home. Kritika is elated that she will pamper her brother. Simran asks her to check in the kitchen. Bunty comes and says everything will be fine once Siddharth comes. Simran says yes.Meanwhile, Bansi tries to make Roshni wear the shagun chunari. Roshni refuses. Siddharth asks Bansi Maasi and her family not to do anything with Roshni else he will go mad and will tell her something which he may repent later. Bansi says Roshni is Kunal’s wife and not his wife. Bansi asks Roshni topick the chunari. Roshni refuses that she is very stubborn. She raises her hand. Siddharth asks her not to think them weak and that he is talking with respect with her. Bansi asks her relatives to take Roshni forcily. Just then, Naani collapses and falls on the floor. The men hold Siddharth. Seeing Naani’s condition, they leave Roshni’s hand while Roshni, Durgardevi and Siddharth take Naani inside the room.Bansi’s son tells her that if Roshni doesn’t come with them with her wish, then Lakshmi will also not come. Bansi tells him they have to do something. Roshni asks her mother and Naani, how can they get her married in her childhood even when they are so progressive. Siddharth tells them they are going and promise to take care of Naani. Kunal comes and assures them that he can help them. Siddharth says she is his Naani and he can take care of her.Bansi Maasi threatens Durgardevi claiming to reveal some sort of truth. Durgardevi requests Bansi Maasi to have some patience and understand the situation. Mona hears their conversation and thinks there is some big secret between them. On the other hand, Kritika is busy with the decoration arrangements. Bunty asks her not to work in this condition. Kritika gets angry. Simran and Raj are happy as Siddharth and Roshni are coming. Roshni tells Siddharth that she forgot her mangasultra inside. Siddharth tells her they should go from here and promise to buy her a new mangalsutra. Roshni insists on taking her mangalsutra. Siddharth goes inside to bring it for her. Later, Bansi’s son talks to Roshni that she doesn’t want to come with them and  that she doesn’t come with her wish then Lakshmi will not come and asks her to follow his instructions, if she needs to evadeBansi Maasi. Roshni insult him and asks him to leave along with his mother. Bansi looks on. Mona and Kesar asks Naani why Durgardevi is scared of Bansi. Naani thinks there is a big secret which will shattered the family. She comes to Bansi and tells her that she can’t think that her friend would do such a thing and stab her on her back.